Jim has been busy installing a couple of windows in what will be our main floor kitchen. Makes the area so much brighter! 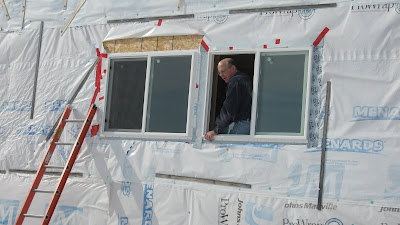 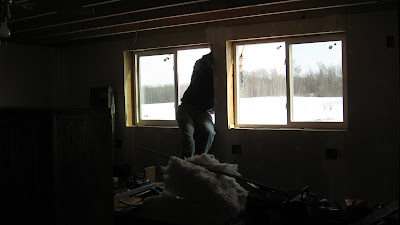 It will be so great to see above ground, rather than at ground level. The stove will be under the left window, the sink under the right window. 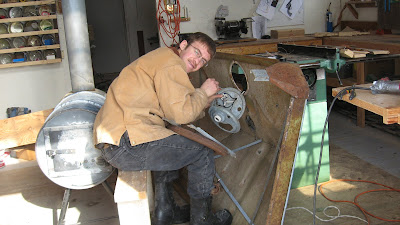 Jonathan has been working with the brooder he will use this year for his chicks. Looks like some electrical work is being done. 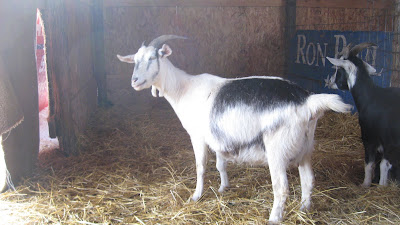 Leah is very pregnant, and due in April. 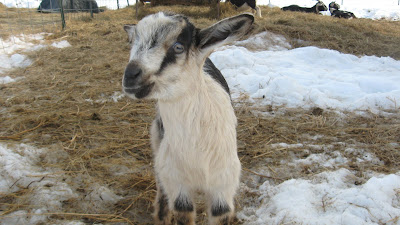 Jonathan named this little kid Lady Jane. She is the one we had in the house overnight when she was first born. Her mama doesn't care to stand still for her to nurse, but she seems to be doing okay with snatching milk when she can get it. She must be getting enough, though, because David was offering her goat milk we had frozen from last fall to supplement but she is no longer interested in it. 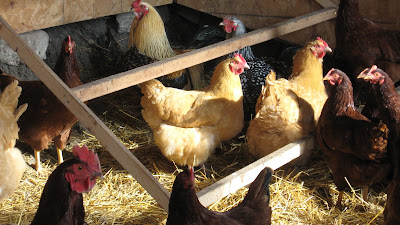 Jonathan's laying hens look pretty healthy, and are doing a better job of producing eggs. The red ones are what Jonathan had as chicks last fall. 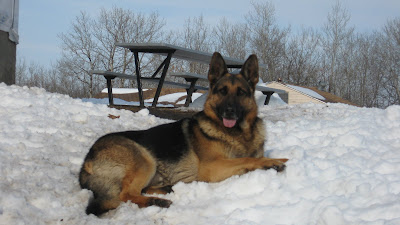 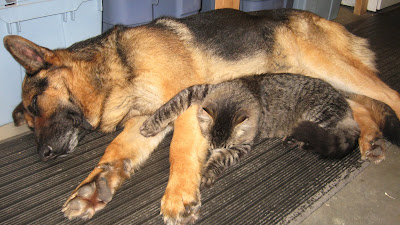 He is pretty tired at night, and will tolerate Henry sleeping with him for a tiny bit, then gets up and moves to a new location to escape him. 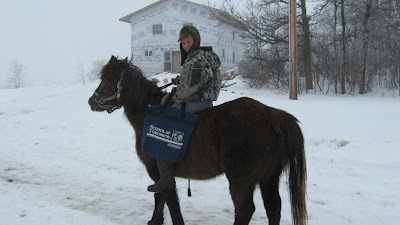 This is David and Calliope, our Pony Express. David had just gone down to get the mail. 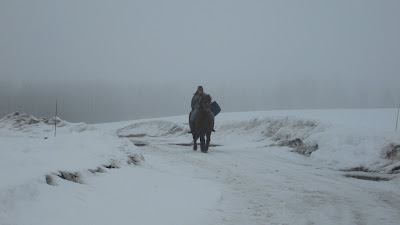 We still have a lot of snow. 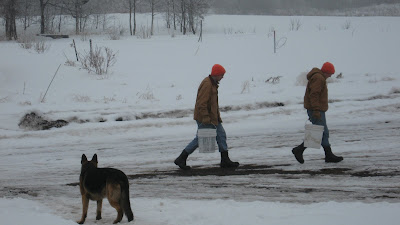 Peter snapped this photo, because they looked like twins! Amazing how Andrew is now almost as tall as Jonathan. 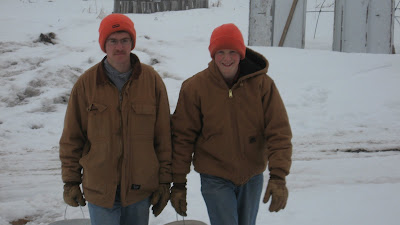 The best part is they are also good friends and work very well together.
Peter has gotten milking down to a science, and we are still enjoying Sandy's wonderful milk and milk products.
I finally figured out what I was doing wrong when I made 30 Minute Mozzarella: My thermometer wasn't correct! The cheese is turning out much better after I switched to a thermometer that was accurate! 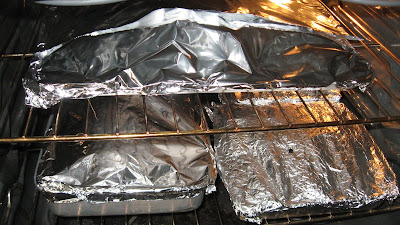 This is Jim's baking ... He is sterilizing dirt to mix for potting soil. We've had a real mess in here lately. 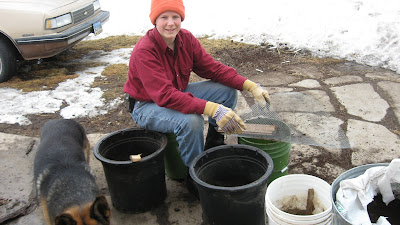 The temperature was rather moderate today, and Andrew sat outside mixing the actual potting soil. A dirty job, but someone had to do it! He was a blessing, and went about the work cheerfully. 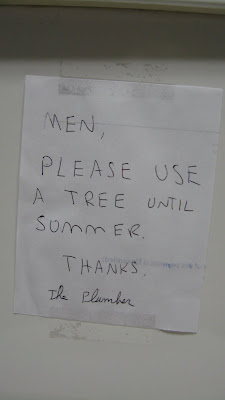 Finally, this is what Jim posted on the back of our toilet. The thing malfunctioned again yesterday, and refused to flush. They checked out the tank, and it was full once again -- only two weeks ago they pumped out the liquid. Looks like we have a problem on our hands.

Posted by Lynn Bartlett at 7:24 PM

Hi Lynn,
Do you mind sharing your potting soil mix? I used to plant into straight compost from the year before, but have not had compost access like that in 5 years and need something for spring.
Thanks
Heather

Oh, we have having major septic issues at our clinic and nobody can use the toilets without our emergency pipe in the clinic popping open and spilling sewage all over the back of the clinic! Not a nice thing to clean up. The city doesn't seem inclined to do anything about it, and having it pumped out every 2 weeks is not viable for us. We'll pray for your system and you can pray the city will do something about ours!
Heather

Heather,
I asked Andrew for the "recipe" for our potting soil; he knew because he had to do the mixing! He said it was equal parts of garden soil, sand, composted goat manure, and peat moss. As you read, Jim attempted to sterilize the mixture in the oven to kill weeds and disease in it, but just one batch took forever.

We'll be praying for your septic system. Maybe if you dig a hole for an outhouse and let them know about it, they will rush over and take care of the problem!

Hi Lynn, I have a liitle experience with septic systems. I may be able to give a couple of suggestions. A few questions first. Do you have a field or an injector system. Is the pump coming on? Where is the pump? Are both sides of the tank full?

Its Guy, we have not talked in a while but i do visit your blog. How are the Turtle Mountain Boys doin?

Hi Guy! It's great to hear from you! How's everyone up north?

We don't have a pump, the drainfield is downhill from the tank, and the tank downhill from the house. The contents are supposed to settle in the tank and then the liquids pass through the distributor box and into 3 separate drain lines. Instead, after pumping out the liquids just 2 weeks ago, it was full again. Maybe something is plugged in the distributor box? We also are wondering why there hasn't been a lot of breaking down of the solids in the tank. My son Peter was coaching me on this comment, I actually know nothing about septic systems -- other than I wish they worked!

The Bartlett Boys have been busy this winter, playing for nursing homes and other gatherings. They have another engagement on Tues. They take a break for the summer since there's just no time for practicing.

What's new up your way? Did you get your home shop set up the way you planned on doing? I think when you quit blogging you had just gotten the jack installed.

Hi Lynn
Your system is different than what we are used to up here (Canada). I think I know how it should work (everything is gravity). That may be part of the issue. With everything having to work on gravity (all pressure depends on distance of drop) there may not be enough force to keep things flowing. Especially over the winter when things start to freeze. Is a pump an option? I have a 1/2 hp Monarch pump pushing my liquid into a septic field. You guys are off the beaten path so to speak. Why don't you buy/ borrow a trash pump and pump your tank down into the field (away from the house) until the warm weather. I bet when the ground warms up things will start to work again. The authorities will frown on this but I would do this in a second and not look back. It is all going into the ground anyway. They will make a big deal just so they can flex their muscle. Do it on the quiet and you will have washroom until you get things corrected.

Life has been trying. God is giving us chalenge after chalenge. Right at the moment we are waiting for Him to take Cheryl's Dad home. It will be any moment now. On a brighter note Chelsey got married last August and I am going to be a Grandpa this August. My shop is still a work in progress. I do a little more everytime I get a few dollars to play with. We have started raising some steers. Get Holstein bull calves for free (because Chelsey's Husband Peter)is a dairy farmer). Butched our first about a month ago and had our first roast last Sunday. Man, it tasted good. You all take care and let me know how the septic deal turns out or if I can help in any way. Reading your Blog and your Web Sight it appears you have ample technical resources. Your boys are developing great skills and have the know how to tackle what ever is thrown their way.

Guy, sorry I missed replying. We are busy getting ready for our homeschool convention. Please ship us a note by email at our web address (www.bartlettfarm.us) and we'll send you one back. I sent you a note in Dec. but didn't know if your family had the same email address as before. Thanks!

You must be so excited about moving upstairs!! Congrats!