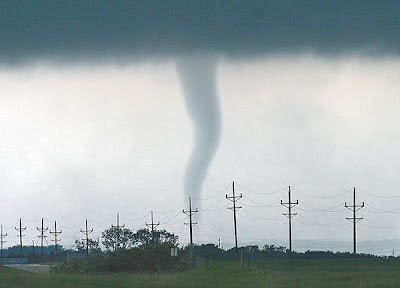 Yesterday Jonathan, Andrew, David and I drove over to Metigoshe Ministries, as Jonathan needed to vacuum. The younger boys and I helped him, so we could get back home to finish our various projects for the day. Just as I was scrubbing the kitchen floor, one of the staff members came into the kitchen to announce the Sheriff's office had just called to say a tornado had just been spotted at Lake Metigoshe; the center is on the shores of the lake. Susie the cook and I had seen a very strange looking black cloud only minutes before, but did not see a funnel cloud.

By the time they received the call the danger was over, and it was only later we received the news that at least one tornado had touched down in the area. Thankfully, there was no damage to our farmstead.

Below is an article published in the Minot Daily News. Rolette County is only a couple of miles from our farmstead, and the International Peace Gardens 15 miles away. Rolla is about an hour away from us. (North Dakotans measure distance by the time it takes to get somewhere, not very often by actual miles.) 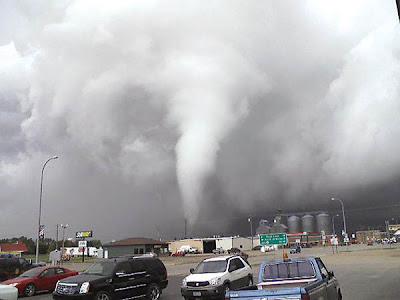 Submitted Photo --
A tornado touches down northeast of Rolla as seen in this submitted photo taken by Sherie Zupan in the parking lot of the C-Store Monday.

According to a press release from the Rolette County Sheriff's Department, the National Weather Service issued a tornado warning in northern Rolette County at 2:30 p.m. Initial indications were that a tornado touched down at the International Peace Garden on the Canadian side.

The storm then moved southeast to Belcourt, where a tornado or tornadoes skirted around the northern edge of the town shortly after 3 p.m. Dr. Richard Larson, medical director of the ambulance service at Quentin N. Burdick Memorial Health in Belcourt, said a tornado was one-half to one mile to the north of town when it moved by the hospital.

"Our employees stepped out of the hospital and shot pictures with their cell phones," Larson said.

There is no count on exactly how many tornadoes might have touched down, but Larson stated one of the nurses at the hospital saw up to four tornadoes, with two of them dropping down side-by-side at the same time near her house.

Although Belcourt was spared the brunt of the storm's power, Larson said a house northeast of Belcourt was demolished and a man seeking shelter in the basement was seriously injured, while a puppy at the house was killed. Larson said the man was injured by a falling wall of bricks. The man, whose identity is not being released at this time, was transported to the Belcourt hospital and then air-lifted to Trinity Hospital in Minot.

The storm then moved east to Rolla, which wasn't as fortunate as Belcourt. The sheriff's department reported a tornado touched down on the northwest side of Rolla at approximately 3:15 p.m. and then continued east, causing damage to residential and commercial structures on the north side of town.

According to a press release from Gov. John Hoeven, the tornado affected a roughly three-block area, and Rolette County acting emergency manager Eldon Moors reported that four homes were destroyed and eight were damaged. Otter Tail Power Cooperative also turned off power to the area to ensure safety. The press release said preliminary reports from Belcourt indicate at least one home was heavily damaged while several others suffered lesser damage.

While there were no serious injuries reported in Rolla, a city firefighter did sustain minor injuries when his vehicle was struck by a tornado as he was observing the storm approach the city.

For those displaced from their homes in Rolla by the storm, the American Red Cross provided relief at Our Savior's Lutheran Church.

"We extend our sympathy to those who were injured and to the families whose homes were destroyed or damaged," Hoeven said in the statement. "I've asked the Department of Emergency Services to respond with any state resources the communities feel are necessary to help in the aftermath of this destructive storm."

Hoeven will meet with local officials in Rolla today at 8 a.m. A news conference will then be held at the Rolette County Courthouse at 9 a.m. Hoeven will also be in Belcourt to meet with Doc Brien, tribal chairman, at 10:30 a.m. at the Bureau of Indian Affairs headquarters.

Sherie and Randy Zupan, who live about two miles southwest of Belcourt, were at a store in Rolla when the tornadoes touched down.

"My husband yelled at me to come out and look at this," Sherie Zupan said.

Randy Zupan wanted to get a better look, so the two jumped into their vehicle and drove to the C-Store.

"Like a crazy person, we stayed out and took pictures on our phone," Sherie Zupan said. "It was pretty devastating."

The Zupans reported seeing three or four tornadoes touch down, and also saw two touch down at the same time. After the storm moved away, they drove around the city to see the damage. The Zupans said there were several houses destroyed about a mile south of Rolla's airport, which is north of the city.

"When we went out to look at it, there were roofs off, shingles, trees pulled right out, the roots and all," she said.

They then left Rolla as rescue efforts intensified and drove north to St. John. They saw the wreckage of a red four-door truck that had been thrown into a telephone pole. They also discovered the straw-insulated building at the Anishinabe Learning, Cultural & Wellness Center a few miles north of Belcourt had one side of the roof pulled off. A family that lived in the area had their house damaged and their pontoon was sitting in a tree.

Zupan says she's seen tornadoes before, but this is the first time she's experienced their power first hand.

"I've seen tornadoes, never this close," she said. "I never want to go through this again. It was pretty scary."

We are all exhausted, and I hope to get Andrew, David and Jonathan to bed early -- myself included. Last night was almost comical.

Before bed, I told Jonathan there were storm warnings, and he should probably place the goat kids back in with their moms, since the kids didn't have a shelter in their pen. This was the first night they were separated from their moms, so the boys could begin milking twice a day. Jonathan said he would get up if it rained. Well, by the time I went to bed about midnight (I was taking the tops off from two gallons of strawberries), they were showing a storm on the weather radar. Sure enough, at 1:30 a.m. the thunder and lightning began, so I woke Jonathan up. He went out to do the deed, and I got dressed and followed him in the car since the pens are way behind the raspberry bushes and close to 1/4 mile away. I thought the headlights would be beneficial instead of working in the dark. Jonathan had to drag one mom down to the barn, since she had a cyst on her jaw which recently opened up and was draining, so he didn't want her with the rest of the goats. By the time he did that we were both soaked. 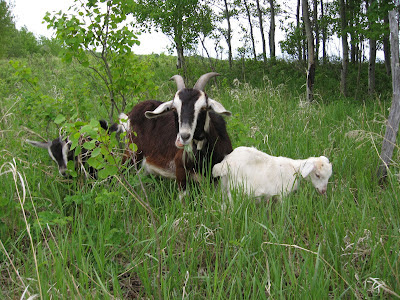 Before I went to bed I discovered the younger boys hadn't taken the kittens down to the barn, so I brought them in the house for the night. For some reason, our cat brings them up from the barn every day, and has them stay in the front of the house. That was a huge mistake. By 2:00 a.m., Jim was really wheezing. Peter then got up to tell me we needed to move the goat kids (where was he at 1:30?!), so I sent him down to the barn with the kittens. It was thundering and lightning quite fiercely. Jim got up and could hardly breathe, so he went outside to get some air. By then David woke up and crawled in bed with me, so I thought Jim would do better in David's top bunk by the window where he could get some fresh air. Jim had just crawled up there when we heard the rain coming in upstairs, so he had to get up again to stuff blankets, etc. in the areas around our temporary door. By the time he returned, we were all able to get some sleep. 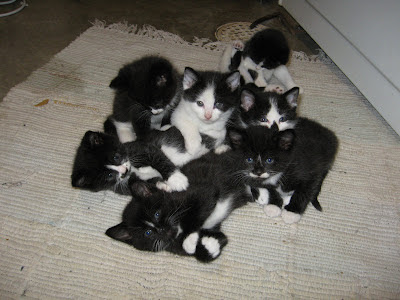 Jim and Peter left about 10:00 this morning for legislative meetings for the home school association. I hope they were able to stay awake! I guess I won't bring kittens in the house again, it is too hard on Jim.
Posted by Lynn Bartlett at 8:33 PM 2 comments: