Life has been going by too quickly lately to post or read blogs. I have been canning, canning and canning some more; Jim and the boys have been working hard at framing in the main floor of our house. Yesterday we had friends over in the afternoon to help raise the 2 longest walls! The first section was really scary, as it began slipping out from the bottom. We were able to correct that, get it in place, and then call for reinforcements. The next section went up much easier, with more help and ropes to help with the very top. These walls are 2 stories high, as we are making a loft as well. By suppertime we were pros at getting up the walls. We are so thankful for all the help we had.

Now Jim has gotten to work on the final 2 walls. I'd sure appreciate your prayers, as tomorrow there are supposed to be 20-30 mph winds -- not what we want when the trusses are yet to be installed. That won't happen for a little over a week.

Just thought I would update you on all of our doings. We will post some photos as we are able.
Posted by Lynn Bartlett at 8:20 PM 6 comments:

This is what Jim and the boys have been doing while I've been canning: 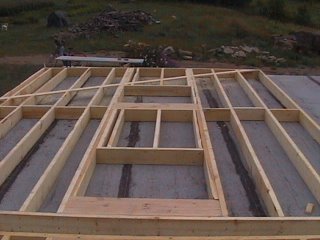 These are the first walls of our main floor! We've lived in our basement for almost 2 years and will probably still be down there for the winter, but we'll have the main floor roughed in and can work on it as we are able. 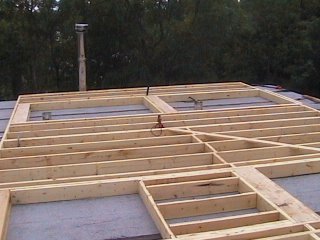 Hopefully this Thursday we will be ready to round up some friends to help raise the walls to an upright position. I think Jim was planning to keep them down until the trusses were delivered, but there isn't enough room on the roof to work on the 2 other walls. 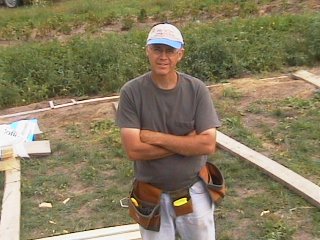 Here is Jim, our master carpenter and building trades teacher! It's amazing how his engineering ordered mind can read a book, assimilate the information, and go out and do it. That's how our basement was built as well.

Back to our corn story: 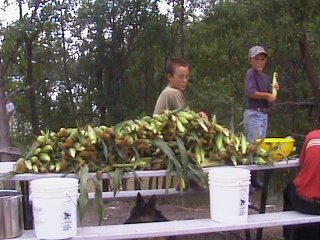 This is what the boys helped me do on Thursday night: husking and preparing corn for freezing. I think Jonathan said we processed 20 dozen ears, which gave us approximately 48 cups for freezing. 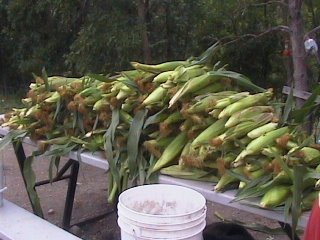 Now that's a lot of corn! We are so thankful to the Lord for the bounty He has given us. Last night was our first major rainfall of the summer, and I think the rain gauge told us we received about an inch of rain. Just imagine what our gardens will do, now that they received some much needed rain. 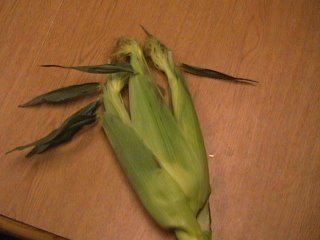 Andrew brought in this triple ear of corn; it had apparently grown together on the stalk. 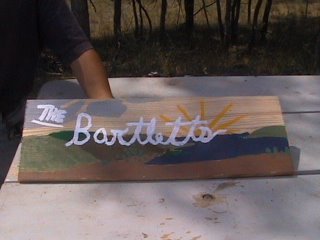 Peter painted this very nice plaque for us. Now we need to find a prominent place to display it.

The boys sent me a couple of photos to post. This is our son Peter with our dog, Samson. Peter tried very hard to make him "his dog," and I think he succeeded! 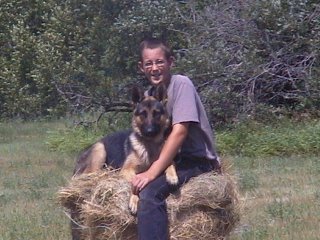 Here is another "friend" of Peters. Unfortunately, these salamanders abound up here in the fall. When they feel threatened, they wave their tail and give off a strange odor. You won't catch me holding onto one of those things! 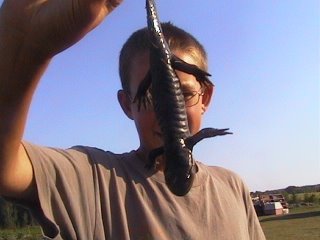 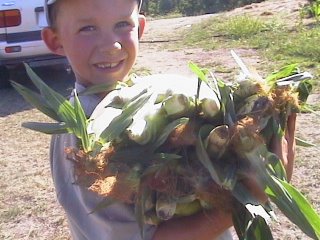 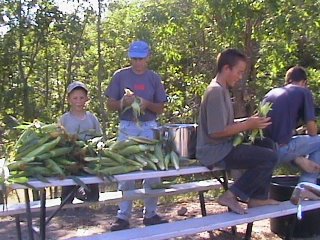 After all the canning we did yesterday afternoon, I was looking forward to a sort of low key day. The jars of beans and carrots needed to be cleaned off and put away, collected herbs dried, clothes washed and hung out on the line, then taken off and folded, bread to be baked, zucchini to be dealt with ... I actually did a lot of the above, and then just as I was thinking about making supper, one of the boys came in and said something like, "Mom, we just picked 156 ears of corn!" Here we went again. I am still cooking the corn, and then it has to be cooled, bagged, and frozen. I don't have a lot of room left in our freezer, but corn is just one of those things that tastes much better when frozen rather than canned. It's a huge treat in the middle of winter, when corn on the cob is just a dream. We had the whole family involved in washing and cutting corn off the cobs while I was making supper, and now it's processing time and clean-up time. Needless to say, the floor needs a good scrubbing as well!

It's scary, but it feels like a touch of fall in the air. I can hardly believe I'm saying that, since last week we were sweltering in 90 degree heat. Today was more in the upper 70's, and tonight is supposed to go down into the lower 50's. I guess we better start thinking seriously about making some more permanent and warm shelters for our Buff Orpingtons, turkeys and goats.

We've really struggled with our Cornish Cross chickens, as they aren't bulking up at all but way behind schedule in their growth. After starting to lose a chicken a day, we came to the conclusion that they weren't getting enough protein in their diet and did some major changes to that. Hopefully they will pick up in weight and will shortly be in the freezer.

The gardens are producing a lot. This afternoon our friend Paulette came over and helped with some of our produce processing. We canned 24 more quarts of green beans, and filled out the last batch with 4 quarts of carrots.

Later in the afternoon I directed the boys to dig up some potatoes for supper. They came back with red potatoes covered with scab. We did some internet searching, and our conclusion is that we had the soil too rich with sheep manure. When we received the truckloads of manure we didn't have anything other than shovels to spread the stuff, so some areas of the gardens received a lot more than other areas. At the time we didn't realize that potatoes do better in more acidic soil. I hope I'm getting this right! Anyway, we will have to plant something like corn in the potato patch next year, and find a less enriched area of the garden to plant potatoes. Boy, everything we do has become a big lesson this summer, and we certainly have learned a lot the hard way about farming!

After supper we harvested more herbs: catnip, camomile (that stuff won't quit producing!), clary sage, another kind of sage, rue and a couple other ones that I can't remember at the moment. It's so nice to be outside until sundown and not be bothered by mosquitoes. I was bothered this afternoon, though, by finding a small cricket jumping around in the house -- my least favorite of all bugs. I was thrilled last year at not seeing a single one around here, but unfortunately the dry conditions have brought not only crickets but also grasshoppers. The boys were fascinated today by watching how far one variety could fly. Too bad the chickens can't free range around here, they would find plenty to eat.

Looks like we will be roughing in the main floor of our house this fall as well. I'm trying not to think too hard about it, as I remember how busy it was when we first moved up here and built the basement. Some of the lumber is ordered, and we are looking to the Lord for when and how to proceed. What a change it will be, to see more than the ground when looking out my kitchen window!
Posted by Lynn Bartlett at 8:27 PM 2 comments:

Two days of canning green beans ... and the season has just begun! Yesterday my wonderful husband helped me figure out the procedure for pressure canning, and it turned out not to be as hard as I thought it would be! We processed 35 jars that day. This morning Mountain Fire Keeper came over and brought a 2nd pressure canner, and that really helped speed up the process. I was able to take one of the stove and replace it with another full one, so the processing time was greatly reduced compared to the day before.

We had the whole family involved. Jim and some of the boys picked in the garden, and some boys stayed in to snap what was already ready to go. Mountain Fire Keeper gave us some valuable pointers -- and help filling jars. Now to pick up the pieces tomorrow, and get the house back into shape.
Posted by Lynn Bartlett at 8:14 PM 5 comments: