Catching Up Once Again

It's time to catch up again.

Winter is our "down time," but this winter certainly hasn't felt that way. I still have mountains of mending to do, jam to finish from last summer's harvest, and various other things that need to be done before we start seeds again. 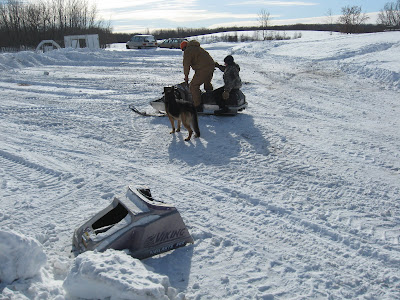 On Friday we had friends arrive for a short visit. They were in the area to check some farm equipment that was for sale near here. Andrew B is a friend to all of our boys, so they were thrilled to have him visit. David was especially excited, because Andrew B has a knack for fixing things, and helped him work on his snowmobile. That old 1970's vintage thing keeps getting resurrected. 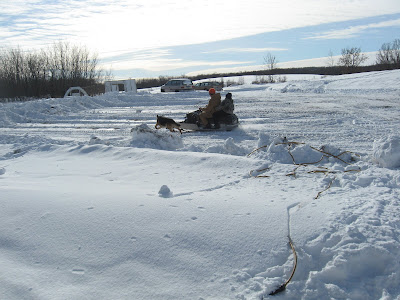 And off they go! At least, until something breaks once again.

This winter we again have snowmobilers running through our land. They seem to have figured out a trail that goes from our mailbox through our smaller field and then onto the lake and away. It never ceases to amaze me, how people are so indifferent to being on someone else's property. 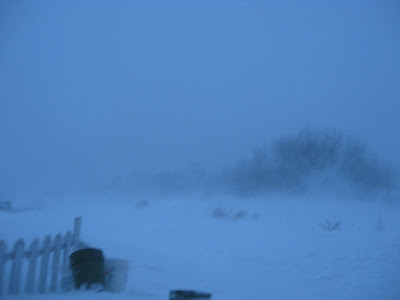 This was what it looked like during the last storm that came through last week. We had over a foot of snow, and then the next day the winds were clocked at around 50 miles per hour. Definitely blizzard conditions. 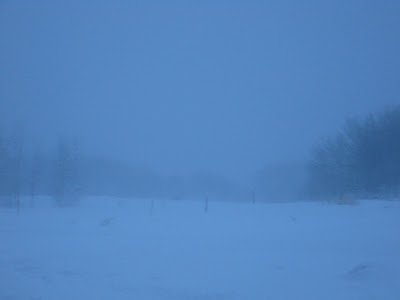 The power was out for a couple of hours. That meant no well water or ability to cook food. Our wood stove is right here, but the top does not become hot enough to heat even water. We need to think through a few things about what we could do for cooking before we lose power again. 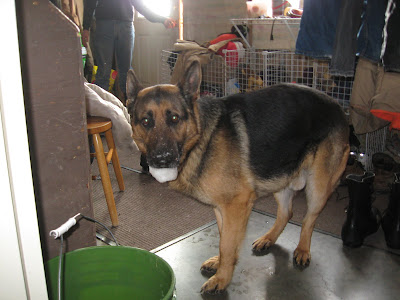 Samson loves it when anyone tosses him snowballs. On this occasion, someone let him in and he decided to bring in his snowball -- in case someone would throw it for him! 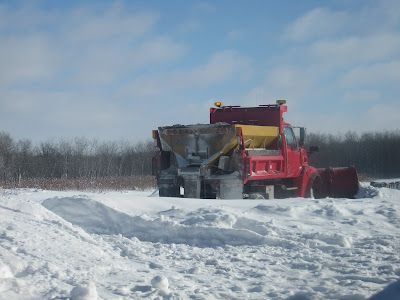 A couple of days after the storm the county plow came through to allow us to get out of our driveway. Peter had to go to his vacuuming job and there was only one pass through with the plow, so Jim had to back down our quarter mile driveway to get out to the gravel road, since there was no room to turn around. The next day the grader came in and cleaned out the rest of the driveway and yard. 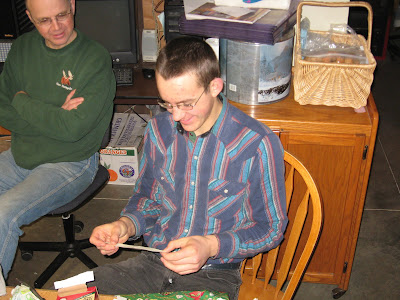 Peter turned 16 on Wednesday. Jonathan created a series of creative clues for Peter to follow in order to find his birthday present from the boys. It was a lot of fun! 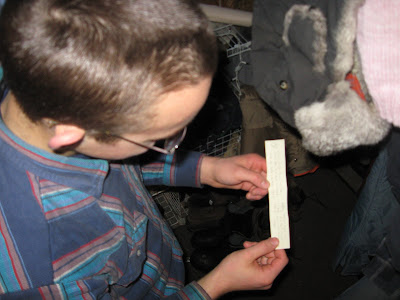 The clues Jonathan gave were quite interesting! 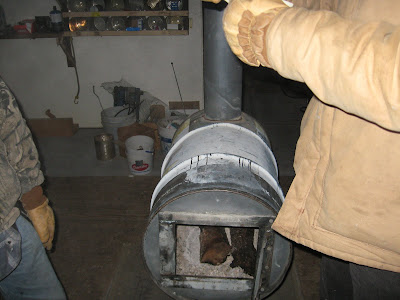 One clue was even found in the barrel stove my Dad had recently given us for our wood shop. The next clue brought Peter to the location of his present. 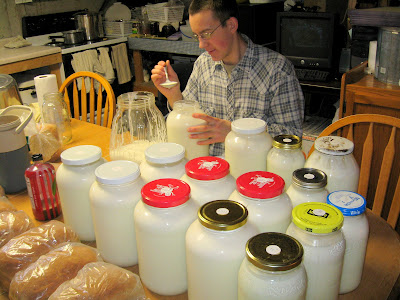 Meanwhile, back at the ranch ...
Time to skim off the cream. Our cow gives almost a pint of cream from every gallon of milk. Thankfully we now have an old electric butter churn that someone found for us. Sure saves a lot of time, since previously we had to shake the cream in quart jars to make butter. 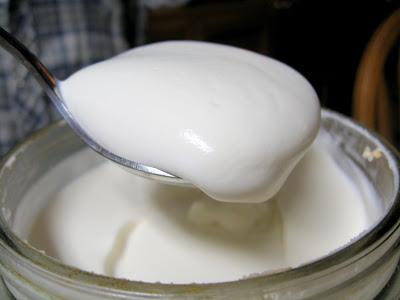 Just look at how thick that cream is! It's wonderful in coffee!
Our family has a new website to advertise all of our products.
Posted by Lynn Bartlett at 11:18 AM 7 comments:

When I can't think of anything else to write about, there's always the weather ... 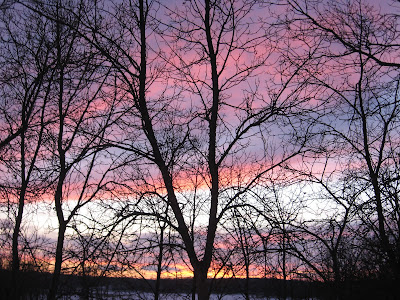 A WINTER STORM WARNING REMAINS IN EFFECT FOR ALL OF WEST AND CENTRAL NORTH DAKOTA, FROM FRIDAY AFTERNOON THROUGH EARLY MONDAY MORNING.

THE FIRST PUNCH OF A POTENT WINTER STORM WILL AFFECT WESTERN AND CENTRAL NORTH DAKOTA FRIDAY AFTERNOON & FRIDAY NIGHT, SPREADING SNOW FROM SOUTHWEST TO NORTHEAST. THERE MAY BE SOME FREEZING RAIN MIXED IN, ALONG & SOUTH OF THE INTERSTATE FROM BISMARCK TO JAMESTOWN FRIDAY NIGHT.

SNOW TOTALS FROM THIS FIRST WAVE ARE EXPECTED TO BE AROUND SIX INCHES, ALONG & NORTH OF A LINE FROM WILLISTON TO BISMARCK.TO ELLENDALE. SNOW AMOUNTS OF 3 TO 6 INCHES ARE EXPECTED FROM BEACH THROUGH DICKINSON, TO FORT YATES ON SATURDAY.

SNOW WILL CONTINUE ACROSS THE NORTH, BUT WE EXPECT THAT A BREAK IN THE SNOWFALL WILL OCCUR ACROSS THE SOUTH. THIS LULL IN THE STORM COULD LINGER INTO SATURDAY NIGHT.

THE SECOND PUNCH WILL OCCUR SUNDAY MORNING THROUGH EARLY MONDAY, AS THE LOW MOVES EAST. NORTHERLY WINDS WILL INCREASE, ALTHOUGH SNOW AMOUNTS WILL BE LIGHTER WITH THIS SECOND PUNCH. WINDS WILL BE STRONGER, & THIS IS WHEN NEAR BLIZZARD CONDITIONS COULD DEVELOP. TOTAL SNOW ACCUMULATIONS FROM THIS ENTIRE EVENT WILL RANGE FROM 8 TO 14 INCHES.
Posted by Lynn Bartlett at 5:41 AM 6 comments:

I'm still trying to catch up from last week's processing of homeschool convention booklets. We had milk in every refrigerator, since I didn't have time last week to do anything with it. I've attempted to make some sort of cheese every day as soon as the morning milk comes in.
I have a lot to learn when it comes to making cheese.
Since I hadn't ordered ingredients for making real Mozzarella cheese, I used a different recipe to make a mild cheese that still melts like Mozzarella. The ingredients are milk, vinegar and salt. I heated the milk to 140 degrees, then add vinegar -- and there is cheese! A day or so later the boys grate it for me, and we use it in pizza and lasagna. It tastes great! 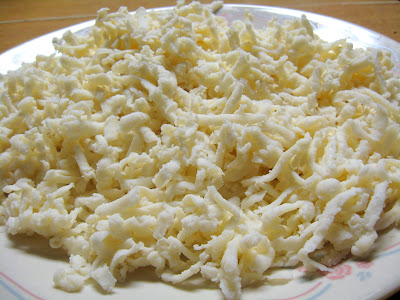 I went on to heat the leftover milk product to 180 degrees and added a bit more vinegar, and the next product I got out of it was something similar to Ricotta. Sometimes it's drier than other times, so I have added some cream to it, and it worked in the lasagna just like the real stuff. 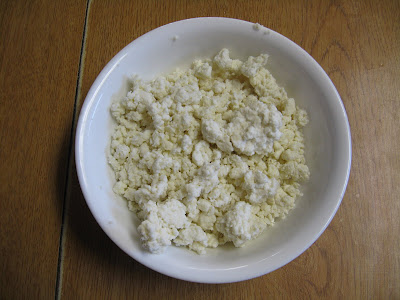 Last summer I helped in the kitchen of a local retreat center when they were hosting a Sons of Norway Norwegian camp. It was there I tasted a goat cheese called Gjetost. There are different spellings as well as names for this cheese. The Norwegians place it on bread (just a very thin slice) along with raspberry jam, and it was delicious! I determined then and there I was going to learn how to make it.

The lady that introduced me to it stated that the process needed both goat and cow milk, but I have since discovered there are three cheeses that can be made: whey from just goat milk, a combination of goat and cow milk whey, and whey from only cow milk. Our goats are dry now, so I will use cow milk until our goats are milked again in the spring.

I found a recipe on the Fankhauser cheese website, but it seemed hard to follow. About a year ago I purchased Ricki Carroll's book, Home Cheese Making, and found the recipe in there. I had lots of questions after reading her recipe, but forged ahead and made a batch. 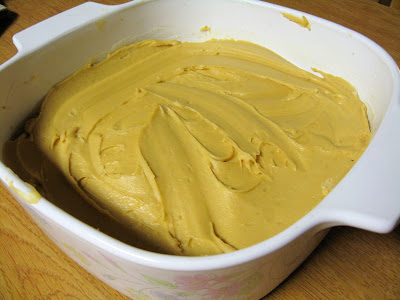 Mysost (another name is Primost) is the result of taking the whey byproduct from making cheese and slowly boiling it down to where it carmelizes and thickens. Cream is added towards the end of the process, but that's all there is to the ingredients. This whole process has taken me from 6 to 12 hours. I can see why it's recommended that a wood cookstove be used instead of a conventional stove top -- that's a lot of electricity! 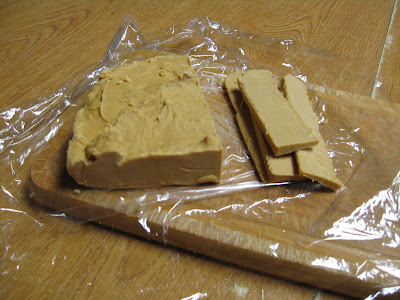 The first time I made a batch the end result was grainy, but that has only happened one other time and I think I've cooked up 5 batches. Each batch has given us approximately 30 ounces out of about 7 quarts of whey. Jim, Peter and I enjoy it on toast for breakfast, along with our homemade raspberry jam. It's easy to make if you have the time to spend in the kitchen close to the stove.

We'll Be Burning a Lot of Wood Tonight ...

I've been spending quite a bit of time processing our state's home school convention booklets, and this afternoon Jim and I drove to town to get them to the post office. We saw the most beautiful sundogs I've ever seen, since they almost made a complete circle around the sun. Too bad I didn't have my camera. The only problem is that sundogs indicate very cold temperatures. 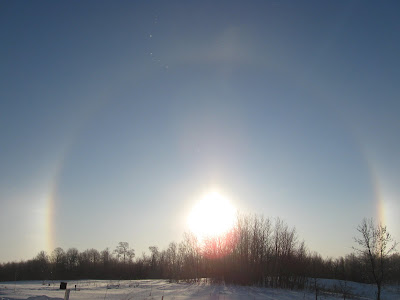 This photo was taken by Andrew back in January 2009.

Once again, from the Weather Service:

FRIGID ARCTIC HIGH PRESSURE WILL CONTINUE TO BUILD INTO THE NORTHERN PLAINS, RESULTING IN BITTERLY COLD TEMPERATURES AND DANGEROUS WIND CHILLS AS LOW AS 55 BELOW TONIGHT & FRIDAY MORNING.

TRAVELERS & THOSE DOING OUTDOOR ACTIVITIES SHOULD BE PREPARED FOR THESE WIND CHILLS. EXPOSED SKIN COULD FREEZE IN AS LITTLE AS 10 MINUTES WITH WIND CHILLS OF THIS MAGNITUDE. CARRY A WINTER SURVIVAL KIT. STAY WITH YOUR VEHICLE IF STRANDED, & ALERT OTHERS OF YOUR TRAVEL PLANS.
I am very thankful for a barn to keep the animals out of the wind. Hopefully they will do okay.
Posted by Lynn Bartlett at 3:03 PM 6 comments:

I just wrote a post that disappeared ... Slightly discouraging when one is in a hurry.

Anyway, this came tonight from the Weather Service:

DANGEROUS WIND CHILL TEMPS AS LOW AS 45 BELOW WILL OCCUR TONIGHT THROUGH FRIDAY MORNING. A WIND CHILL WARNING MEANS THE COMBINATION OF WIND & VERY COLD AIR WILL CREATE DANGEROUSLY LOW WIND CHILL VALUES. THIS WILL RESULT IN FROST BITE & LEAD TO HYPOTHERMIA OR DEATH IF PRECAUTIONS ARE NOT TAKEN.

I think I will quit here before I lose another post!
Posted by Lynn Bartlett at 7:20 PM 1 comment: