Whenever the weather has been warm enough, Jim and the boys have been working on the upstairs. They are doing a very good job of installing sheetrock, and what difference it makes! I have trouble visualizing things, but now that the sheetrock is up I can easily see how large the rooms will be. It's getting more exciting all the time! We still need to purchase windows and an inside door, but things are really taking shape. 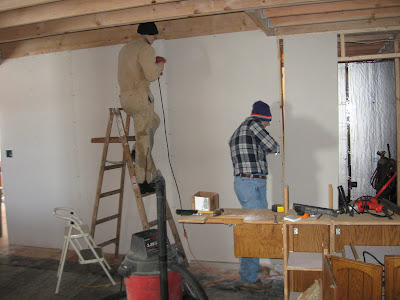 The men are using part of my new cupboards as a table; sort of like them using my refrigerator and freezer to hold their tools when we first moved up here! 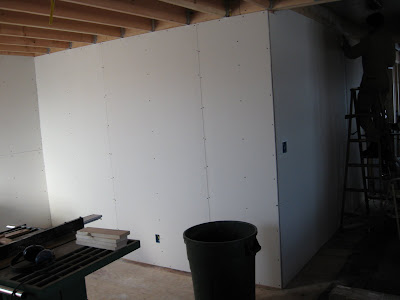 Once spring is officially here and the temperatures are favorable, we'll be taping and whatever else is needed to finish up the sheetrock. This is all new to me, so it's just another one of those things I have yet to learn to do. There will be lots of areas to practice on!

For the winter, the second floor has sort of been sealed off to try to keep what heat is in the main floor from escaping. The eaves are still open to the elements, although they did use insulation to sort of plug them up. That is good, as last year we had some trouble with birds checking out the house. Hopefully this summer we can close them up and side the house. House wrap isn't very exciting to look at.

Last fall Jim cut a hole above the wood stove in our basement to help bring some heat to their construction area. There are times when the boys forget to latch the outside door up there, and one or more of the cats manage to get in. They all know about the hole, so there are many times when I catch a glimpse of a cat climbing through, jumping onto the wood stove, and onto the floor. I don't have any photos of their antics, though!
Posted by Lynn Bartlett at 4:32 PM 5 comments: 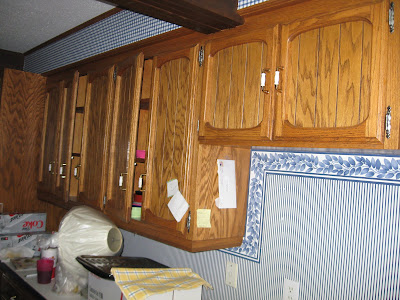 No, this isn't my kitchen, but it could be some day! Friends of ours have daughters that clean house for another family, and the house they clean had these cabinets in the kitchen. Apparently the owners have decided to add onto their kitchen, and wanted to have all new cabinets, etc. installed. So, our friends called to see if we wanted these people's cabinets! Of course we said, Yes! They even went so far as to take them down for us and store them at their farm.

Another set of friends from up here took a trip down to where these cabinets were stored, and taking our trailer, loaded the trailer with as many of the cabinets as they could. Apparently the cabinets come in 12 foot lengths, so only one set would fit on the trailer. The reason for that is they also included their dishwasher! This is all so amazing, since never in my wildest imaginations did I dream we would have beautiful oak cabinets in my kitchen to be! I'm not sure if the dishwasher will ever be installed, but it's so great to know we have one if we decided to do it. I thought I would be utilizing old workbenches and Rubbermaid containers for the rest of my life! That goes to show me how much I underestimated my Heavenly Father, and the surprising gifts He has for us. 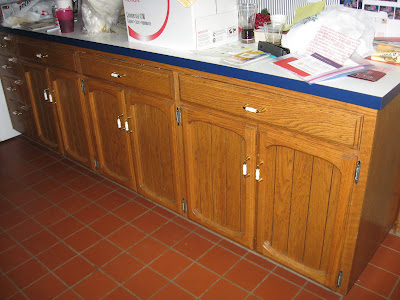 Our friend that is bringing the cabinets up called yesterday and commented that I am getting a beautiful set of cabinets, with a very nice sink and very fancy faucet. 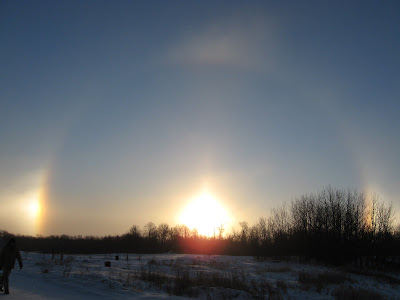 There are advantages to living in the north and having very cold weather ... Peter took this photo a few days ago of the sun rising. Notice the dome of light around the sun. We call those sundogs.
Posted by Lynn Bartlett at 6:36 PM 5 comments:

Cheri the TN Farmgirl gave me an assignment, which is to:

*Link to the person that tagged you.
*Post the rules on your blog.
*Share 7 random and/or weird facts about yourself on your blog.
*Tag 7 random people at the end of your post and include links to their blogs.
*Let each person know that they have been tagged by leaving a comment on their blogs.

The last time someone did this to me I didn't do it, so I thought I better do it this time! The boys were giving me all sorts of things to list, such as learning to repel off the side of a fire station building, and the fact that we have 4 children in Heaven; but I thought it better to list things that have happened since moving to our farmstead. Here goes:

1. When we moved to our farmstead we lived in a pop-up camper for five weeks, without the benefit of electricity, water or sewer. Talk about culture shock!

2. During hunting season the second fall we were here we had a cow moose live close to my clotheslines for 3 whole days.

3. The lady that we bought our property from is 80 years old, and came to visit us that first winter by riding over in her snowmobile.

4. In the winter of 2005, our son Jonathan walked down to the mailbox through the woods, and discovered cougar tracks. We have photos of the cat's footprints to prove it.

5. I canned raspberry jam before moving to the country, but had never touched or even watched a pressure canner being used. Now I wonder why I was so afraid to try canning that way.

6. While roughing in our house (which is a two story structure and we currently live in the basement) we had scaffolding set up so we could reach up to the roof. We kept catching our turkeys climbing the scaffolding and roosting on the roof! It wasn't much fun for the boys to clean off the scaffolding before they got to work each day. 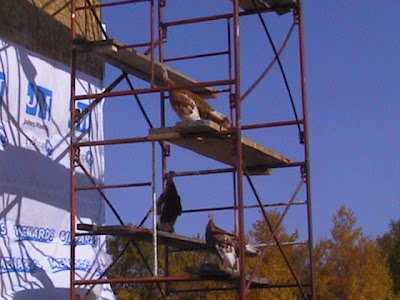 Now it's my turn to tag 7 people: Katie, Susan, Jonathan, Peter, Andrew, Karisa, and Bonnie.
Posted by Lynn Bartlett at 7:00 PM No comments: