Winter has definitely arrived. It's actually been cold -- and very cold indeed! We continue to learn the ins and outs of farming, and unfortunately we sometimes have to learn things the hard way.

Last Saturday the boys went down to the goat shed to do their chores and discovered one of our does was down. Ebony was laying on her side, too weak to get up. The weather had turned very cold overnight; the temperature in the afternoon was in the 20's, but by morning it had dropped to 30 below zero. Poor Ebony was very cold. Jim and the boys rigged up 2 heat lamps, and added bedding and a blanket for her.

Jonathan thought we should check on Ned our buck, since he hadn't heard him stirring yet. David ran over to his shelter, and was very upset to find him dead. We aren't sure just what happened, since he seemed fine the day before. I usually call to him when I go outside, and if he is in his shelter he will stick his head out and greet me. He had done that the day before, so it was a great shock to me.

I am very grateful for a network of people we have come to know and love, who gave us good information on what to do to save Ebony. She is still weak, but gaining strength. We continue to check on her because if she falls over onto her side, she cannot get up on her own. It has been exciting to watch how patient and caring the boys are with Ebony as they tend to her needs.
Posted by Lynn Bartlett at 7:50 PM 4 comments:

Part VI: Our Home in Between 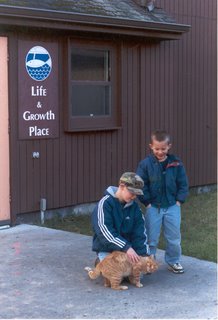 Before we officially moved, Jim and the boys spent approximately 2 weeks on the land, gathering information on contractors, contacting the local phone company to bring in a phone line, adding electricity, etc. Jim knew there was the distinct possibility the house would not be ready before the snow flew. Approximately 3 miles from our house was a retreat center on Lake Metigoshe, aptly called Metigoshe Ministries; Jim contacted their office to see if there would be a possibility of our family bunking in there until the basement was finished enough to move in.

Friends surprised us by driving up just a week after we moved up here, and stayed at Metigoshe Ministries. Part of their facility is an old church that was moved to the site, and bunk rooms were added for visitors to use at a very reasonable price.

I was still in a state of shock after having moved only a week previous to their visit, and was so thrilled they had brought enough food to feed our family as well. I hadn't brought much in the way of food with us, since I knew I had no place to store anything. (In one of my other posts, I explain how our outdoor refrigerator and freezer were storing tools, etc.) Part of my culture shock was also due to how expensive food was to purchase in our town's 2 small grocery stores; I could purchase a jar of unsweetened applesauce in Fargo on sale for 99 cents, and in Bottineau when it went "on sale" (and they rarely had unsweetened) it was at least 3 times that much. I was finding it very hard to cook anything for a reasonable price. Metigoshe Ministries not only had bunk rooms, but there was an area in their building called "Life and Growth" that had a full size stove, apartment size refrigerator, and living area. We ate out meals in that room, since it was very chilly outside. Anyway, our time with our friends gave us the opportunity to scope out where we could possibly live on a short term basis until the basement was roughed in.

Jim's folks came shortly after our friends had gone back to Fargo, and stayed for a little over a week. The night before they left to head back to New Hampshire was the coldest night we had experienced: 27 degrees! That is a bit chilly for living in a canvas pop-up camper. Jim decided it was time to do something about our living arrangement. 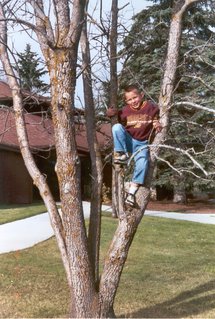 That morning, we jumped into our van and made a trip over to Metigoshe Ministries. We talked with the people in the office, and were told we were welcome to move into the Life and Growth Place. What a blessing it was to have a warm, dry place to stay! We were given two rooms, one for the boys and one for Jim and I. We knew any time someone wanted to stay in the rooms we occupied we would have to move upstairs to their actual bunk rooms.

It rained steadily that first night ... So much so that when I helped get our youngest ready for bed (we even had easy access to a shower!) we discovered the rain was running in from the ceiling. I found the lady who stays in an apartment on site, and she realized the worker who was reroofing had neglected to tarp the roof! As I was running around helping to mop up water and placing buckets in strategic areas, Jim was on the roof with the director, nailing on tarpaper. What a night! Of course, the boys thought it was great fun. 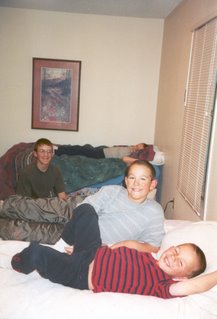 How great it was to be able to clean up and sleep in a nice bed, after working hard during the day on our basement. I made meals in the Life and Growth Place and then brought them out to Jim and the older boys. I tried to keep the area clean as much as possible, since there were quite a few people that would walk through there and even use the room. We cleaned up especially for Sundays, since a church also meets on the premises and Life and Growth was used for Sunday School. 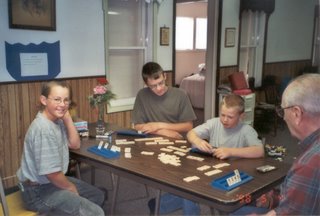 During our stay my parents came from Minnesota to see us. It sure was nice to have a place to visit that wasn't out in the cold!

Our family has many fond memories from living at Metigoshe Ministries. Jim tells everyone we stayed there for 59 days and 128 loads of laundry! The staff truly went out of their way to help us out when we needed a place to stay. Not only that, but out of our time there we developed relationships. Our oldest son has a vacuuming job there and I am occasionally called upon to help out with cooking, cleaning or office work. The Lord truly blessed us with our friends at Metigoshe Ministries.

Last winter I was reading posts from a Christian self-publishing Yahoo group, and happened across a family that called themselves "Lighthouse Farm." Something they said made me curious, so I checked out their website: www.lighthousefarm.com . I discovered we had two things in common: They were currently living in Indiana, and were packing up and moving to the family farm in Minnesota. Well, I lived in Indiana for 3 years and am originally from Minnesota, so they were as good as family to me! It was then I started reading Good Farmer John's blog.

This was my introduction to what people were calling Christian agrarian thought.

Jim and I moved to the country because we wanted our boys raised in the country, and needed the space to grow our own food and do other things we had dreamed about. Jim is the thinker in the family, and knew a bit about the large agricultural corporations and how corrupt they are. My only knowledge of the Monsanto corporation was its name; a friend from Fargo worked for them, and also married a chemist in the company.

John Mesko has written an excellent post over at the Northern Farmer blog (www.scepaniakfarms.com/blog) entitled, "Authentic Agriculture: Defined." Reading this post will give you an idea of what our family has been thinking, since we are in agreement with the Meskos in what they are expressing. I am very grateful to Good Farmer John, since he has helped me to understand the times with regard to farming, and also to see the importance of raising healthy, wholesome food for our family.
Posted by Lynn Bartlett at 3:32 PM 2 comments:

In spite of all the busyness involved with getting settled and working on the basement, there were times of fun and entertainment for the boys. When we lived in the city they always wanted to build a treehouse, but strict city codes forbid that from happening. This tree fort was one of their first creations -- and it was truly a work of art! We called this one Andrew's treehouse, and he worked diligently to make sure it was sturdy. I soon figured out that anything damaged or thrown out would soon make its way over to Andrew the junk collector's fort. Andrew could recycle just about anything! 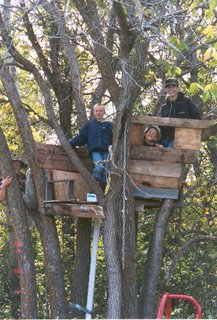 Finally the day came in later September when the cement contractor came to get started excavating the basement. Dan seemed to enjoy being around our boys, and even though he had a lot of jobs going at once in other areas as well as ours, managed to give each boy a lesson in operating a backhoe. This particular photo shows our oldest son working the controls. 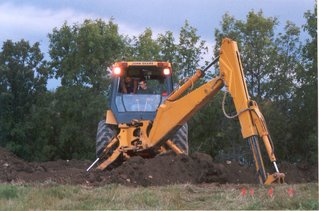 Another dream Jonathan had while still in the city was of trapping and hunting. He managed to read every book he could get his hands on regarding the tricks of the trade, and was itching to bring the information he had in his head down into his hands.

Well, the man we bought our land from used to be quite a trapper himself, and whenever we stopped over at their house Jonathan would pine over the traps he saw hanging in their pole building. I guess the last day Slim trapped was over on our land, and he managed to catch 67 muskrats! Someone mentioned Jonathan's interest, and Slim told us the next time he caught a raccoon eating his corn he would give it to Jonathan. His method of getting rid of the varmints was to catch them in a live trap and then drown them. That way the pelt was in good shape. He soon caught one in his trap, and called us to come and get it. 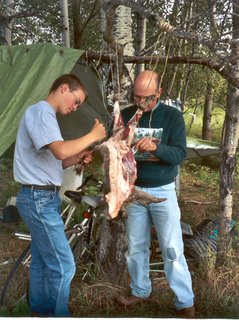 We didn't have all the tools of the trade, but Jonathan did a good job of skinning the raccoon. After he was all done, he hung the carcass across the field and on the edge of the woods for the coyotes. We noted later those carcasses continued to hang and were untouched by anything but flies! Maybe coyotes are fussy eaters. 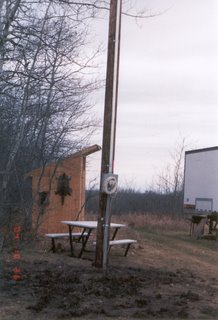 Jonathan's handiwork was stretched on the side of my wonderful outhouse that was built especially for me by Grandpa Bartlett, and they looked pretty impressive! (The picnic table was also made by Grandpa B, and hauled all the way over here in pieces from New Hampshire when they came just 9 days after we moved to the Turtle Mountains.) 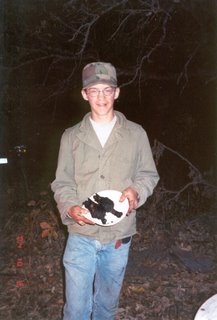 And how, do you ask, does raccoon taste? We all thought it tasted just like chicken, of course!