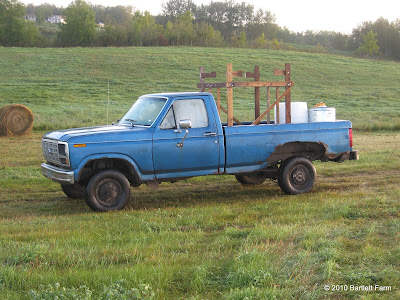 In December of 2007 the boys received this 1984 Ford F-150 truck from one of my brothers.  My parents' neighbor had purchased the truck, and gave it the best of care.  After the neighbor passed away it was given to one of his son-in-laws, but was never used.  A year or so later my brother made an offer on the truck, and then gifted it to our sons.

We sure found all kinds of jobs for the truck, and the 4-wheel drive came in handy when our road turned to mud or we had a snowstorm and someone needed to get out of the driveway.   The truck was Jim's mascot when he campaigned for state senate back in 2008.

The longer we had the truck the bigger the holes grew in the floor and bed, too.  It was all those wonderful Minnesota winters complete with lots of road salt that did a good job of deteriorating the body of the truck.

Last December Jim, Jonathan and I took a trip to Minot, and returned home in a very bad ice storm.  I was sitting in the middle, with Jim driving and Jonathan reading a book to my right.  I could glance down at the bottom of the door on Jim's side and see the yellow lines in the middle of the road.  You'd better not wear good clothes during mud season or rainy weather, since you would end up getting splashed!   Jim always told us to keep everything off the floor -- or it would be gone.

Well, yesterday the guys took a trip to Minot with the old truck.  They didn't even get to Bottineau when the drive shaft disconnected and they had to pull over.  Someone stopped and Jim used their cell phone to call us; Peter took the car down and Jim used it to get parts in town.  They were able to repair the truck for less than $5.00, and once again they were off.

The guys completed some of their errands in Minot when someone noticed the trailer had a flat tire ... Always something.  Thankfully they were close to Home of Economy and drove over there for a new tire.

And then they were able to arrive at their final destination to receive a very special gift. 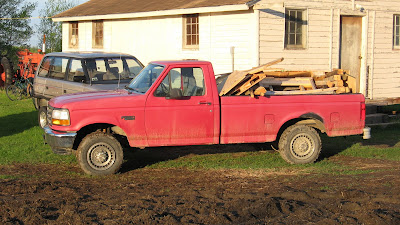 It's a 1994 Ford F-250!  We are so blessed, and thrilled!  The other truck will definitely be used around the farm, but we'll use this one when we need to go on the road.  ﻿
There's been a lot going on lately, and I will try to post more often.
Posted by Lynn Bartlett at 7:24 PM 3 comments: