New Adventure for Our Family

Today we were invited to our neighbor's, which is a mile north as the crow flies (longer by road). They have about 30 sled dogs, and needed to take them for a run before the weekend, when they are hosting some type of "wilderness women" type thing at the local state park. So, I got to ride in the sled with our oldest son driving, and then our 2nd and 3rd sons took another sled, with my husband Jim and our youngest son taking the last sled. Our neighbors used snowmobiles to ride alongside, in front or in the rear to make sure we were doing okay. The weather was perfect, and we had a great time! We traveled a distance of 12 miles. I am ready to do it again! We were taught how to harness and get them attached to the sled, as well as how to use the sled itself. The dogs were just itching to go, so it was quite wild and noisy before we got going. By the time we got back they were a little on the tired side, since they were pulling us up and down hills the whole 12 miles. The owner of the dogs raced in the Ididerod back in 1999, and only has one dog left from the original team.

If you want to see photos and a short You Tube video of our time, check out our son's blog at www.jonathanjbartlett.blogspot.com.
Posted by Lynn Bartlett at 7:36 PM 4 comments:

Heading Down the Home Stretch

Just a little over a week from now we will be heading to the ND Home Educators' Conference in Fargo, ND. I am the occasional secretary for the Assoc., and my boss is Jim. Not only are we preparing for the convention but working to keep the freedoms ND homeschoolers have attained and stem the tide of attempts to take some of those freedoms away. The ND legislature meets every other year, and this legislative session has been a doozy for us homeschoolers. So far we have done okay and even received the right for grandparents to homeschool their grandchildren, but yesterday was "crossover day," and all the bills switch from the House to the Senate or Senate to the House. Needless to say, the fight will be on again next week as the various committees meet. It's been such a blessing to see all the homeschooling families that continue to send emails and call their legislators to fight for what they desire to see happen within the state.

Our homeschool convention will feature Skeet Savage and her son Israel Wayne from Wisdom's Gate. Steve Demme from Math-U-See will also be speaking. We are also glad to have Good Farmer John himself -- John Mesko of Lighthouse Farm (blogs with Northern Farmer, Jim V. and Nathan V. at http://www.scepaniakfarms.com/blog/ ). John will conduct a workshop and also offer at booth in the convention hall.

My son Jonathan and I have lots more to share regarding our adventures with homesteading, but it's kind of on the shelf until the convention is over.
Posted by Lynn Bartlett at 8:34 AM 3 comments:

I found this section of an article in today's Fargo Forum online newspaper. This will give you an idea of just how tough we are up here in the frozen north!


Temperatures dropped below zero in Minnesota on Saturday morning and were expected to remain there until sometime Tuesday, the weather service said. By noon Monday, subzero temperatures had blanketed the Minneapolis-St. Paul area for 58 straight hours - the longest stretch in 11 years.
In northern Minnesota, the temperature crashed to 42 below Monday morning at Embarrass, 38 below at Hallock and 30 below at International Falls, the weather service said.
Veterinarian Wade Himes wasn't too concerned as he ate breakfast at the Shorelunch Cafe in International Falls.
"We get up and go to work, and people come and see us. I don't think anything changes that much. (You) just dress warm," said Himes, 69.
Grand Forks, N.D., also registered 30 below.
"For this time of year, this isn't that unusual, as far as temperatures go," said weather service meteorologist Bill Abeling in Bismarck. "To get record temperatures this time of year in North Dakota, you've got to delve down in the 40-below region, so we're not even close."

(PS: That's not true. When we got up this morning, the temperature on the outside thermometer read -40 degrees! Maybe that is why our car wouldn't start this morning ...)
Posted by Lynn Bartlett at 3:10 PM 3 comments:

The basement foundation was finished, and now it was our turn to enclose the sides and roof. My brother Mark had very generously offered to forgo his usual camping near the Boundary Waters in Minnesota to help us work on our basement. We are so thankful for the week he gave us.

Our well was being dug the same time we were working on the basement. Jim had contacted as many well drillers as he could find to hopefully get someone to drill before winter set in. One man agreed to come, but never showed up. Finally, a man came over to check things out, and told us he would soon return to get busy. We had to learn to accept the schedules of the various contractors, because there were days when they would just plain not show up -- with no explanation. We had been told to get someone over to witch for water since there was no guarantee that water would easily be found. That just didn't sit right with Jim and I, since we feel divination like that was not something the Lord would approve of. Instead, we prayed a lot about the correct location for the well.

The day the well drillers showed up was the day Jim felt impressed to change the location of the drilling. Instead of drilling in an open space he asked them to please drill closer to our power pole. That was fine, and they began drilling. 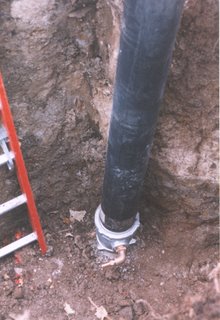 I can see why not many people make well drilling their occupation; it is a very dirty, muddy, cold job. They must have worked on our well for at least a week. Shortly after they began they hit a large rock and had to move over just a bit. We continued to pray! 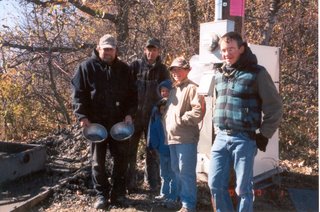 We take photos of everything, and this one shows our first bit of water! We were so thrilled. Of course it took drilling down 243 feet to hit water. We were charged $5.00/foot for the test hole, and then an additional $8.00/foot to actually develop the well.

The drillers had to come back on a Saturday when we were ready to bring the water to the house and install the pump. Jim was away from home that day, so the boys and I were in charge of doing what we could to help out. All I can remember is how bitterly cold it was that day in October. 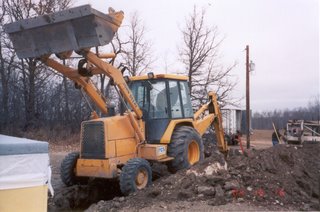 The man who excavated and poured our basement brought his backhoe to dig the trench for what was needed to get the water to the house. It was amazing to watch him operate that backhoe, as he actually walked it across the trench so he could dig in front of him as he went along. When he was finished he walked the thing back off the trench! 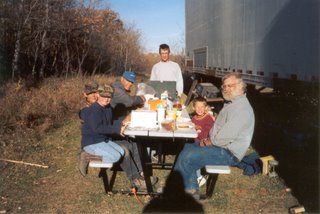 While all the well drilling was going on, Jim, Uncle Mark and the boys were working on enclosing the basement. In this photo, Jonathan was making scrambled eggs on our Coleman stove. He knew how to use the stove much better than I did! Uncle Mark taught the boys how to catch hornets, since they tended to swarm us every time we sat down to eat a meal. 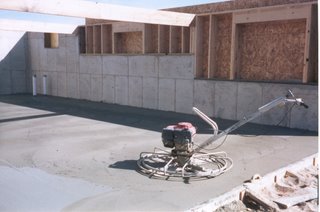 Jim chose to utilize wood for the parts of the basement that would be above ground, including the entire side facing the lake. The basement was built into the side of a hill. The cement contractor used this type of machine to smooth out the floor, and people often ask us how we ever got it so smooth. 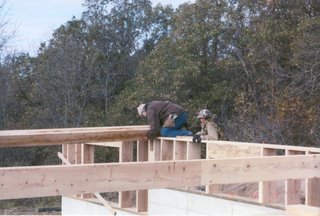 Uncle Mark was great at teaching our boys the fine art of housing construction. He seemed to have all the time in the world to answer any and all questions. Mark later told me the burden of the construction was not on his shoulders, so he was much more relaxed about it than Jim was. 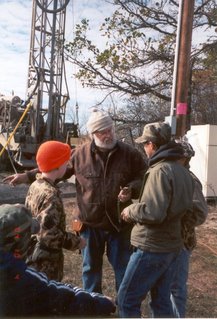 We also had the Kenney family up from Fargo for work detail. Their children were soon referring to my brother as "Uncle Mark," and learned as much as our boys did. 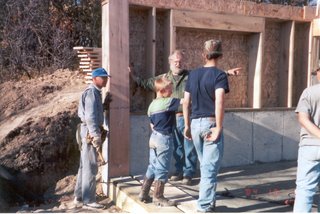 Everyone had a job. Jim was learning a lot from Mark as well. 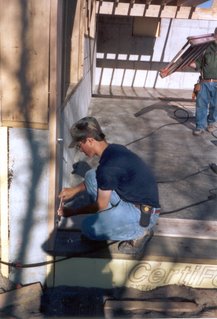 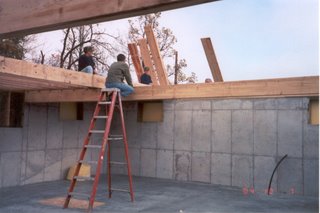 That corner is where our bathroom is currently situated. 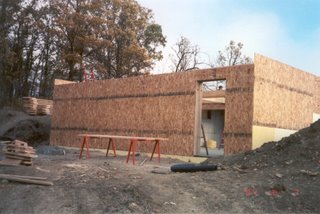 This is the side of the house that faces the lake, which is farther down the hill. 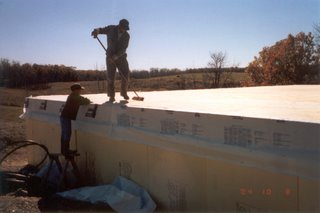 Finally getting the roof ready for winter! We weren't sure how a flat roof with rolled roofing would handle snow and cold, but we gave it a try. We didn't have enough finances left to install windows, so we faced the winter living in a dungeon. The only window we had was in the door. 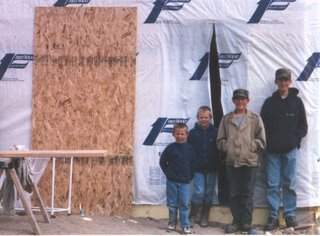 Left to right: David, Andrew, Peter and Jonathan. This was our makeshift door until Jim could install the real thing. This piece of plywood was nailed in front of the opening to keep critters out while we were back at Metiogoshe Minstries for the night. 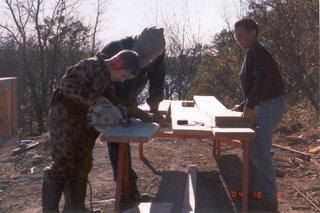 Caleb Kenney getting a lesson from Uncle Mark in the proper use of tools. Peter was taking the lesson in as well. 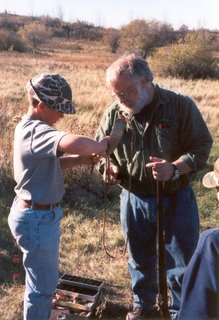 Our time with Uncle Mark wasn't all work ... There was time for play as well. Our boys and the Kenneys had a lesson in black powder loading and shooting. 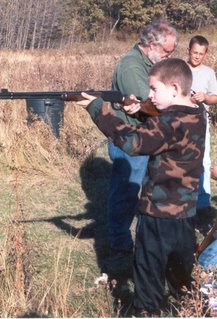 We have a nice shooting range developed by Jonathan. Kenneys seemed to have as much fun as our boys! 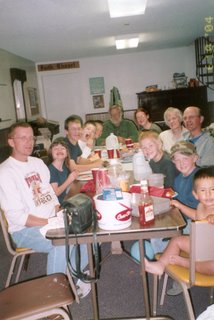 While all the building was happening, the ladies fixed meals over at Metigoshe Ministries. What a crew! 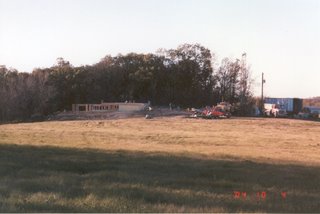 October 4, 2004. The Lord gave us beautiful weather in which to build. This was the summer the area had its last frost in June, and first frost in August! We went from raw land to starting our own homestead in the Turtle Mountains.