It's already been two weeks since our family made a trip to see my family in northern Minnesota. We made the almost 8 hour trip in good time, arriving just a few hours before a blizzard hit. By the time the storm was over a day later, the area accumulated about 12 inches of snow and had clocked winds at 53 mph. By the time we left for home just four days later, the snow had almost completely melted. This is typical for the area's spring weather. 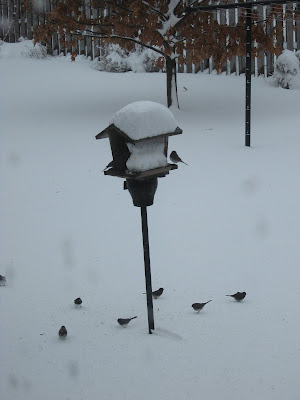 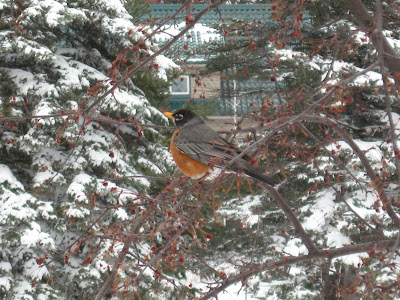 We had a great time with everyone. Our family stayed with my oldest brother and his wife, and then drove the few miles down every day to visit with my Mom and Dad, and anyone else that happened to stop by to visit. We learned a new game called Mexican Train, and enjoyed trying to beat Grandpa Wagman. The boys learned quite a few tricks from him, and made for a very fun time for all of us. 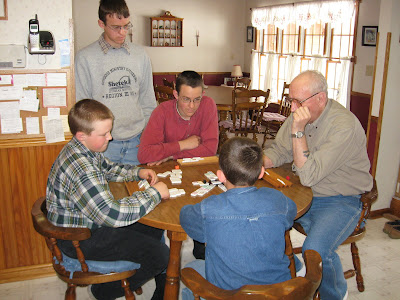 Grandma W had a few tricks up her sleeve as well! 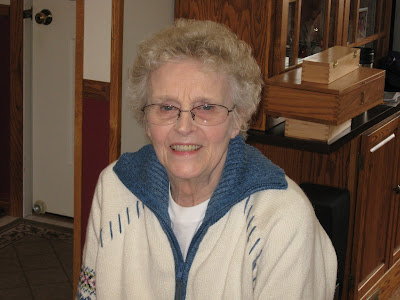 Our older boys were given a 1984 Ford F150 by one of my brothers, and now it was time to drive it home. What a surprise to discover the truck had less than 50,000 actual miles on it! The body is a bit rusted (due to all the deicing materials used during a Minnesota winter), but it certainly doesn't affect its potential for use on the farm. Jim and Jonathan left Sunday morning to head back, and Jim used the time to teach Jonathan how to drive a vehicle with a stick shift. All went well on the way back. 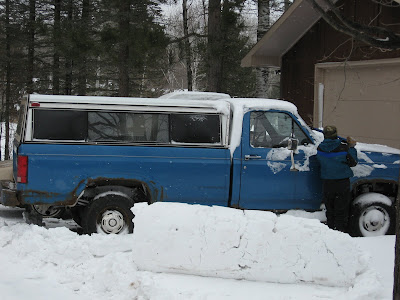 Our family all got together at my older brother's for pizza and all the trimmings. I was thrilled to finally meet my niece and her husband's little girl, who was born in November. Here is a four generation photo, consisting of my brother Mike, his daughter Kate, granddaughter Maddie, and our Dad. 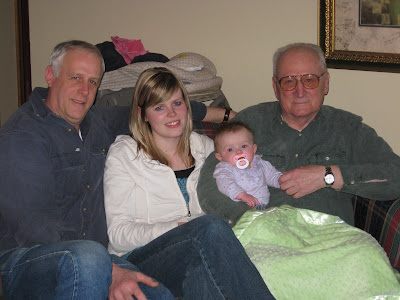 On Sunday the boys and I were planning to meet my sister-in-law in Duluth to visit the Omnimax theater; however, my memory wasn't as good as I thought it was, and I got lost! We ended up driving to the observation area at the top of Thompson Hill, and enjoyed the view. We noticed the aerial bridge was going up, so we headed down to the lake front and watched a ship heading out of the harbor. The day was so clear and nice. 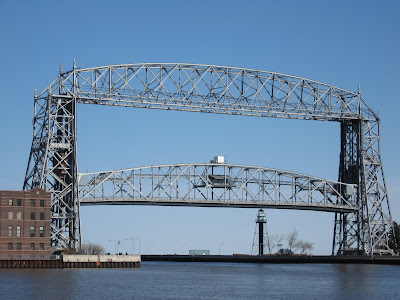 The rest of the boys and I stayed until Tues. morning, when we headed to Moorhead, MN to stay with a good friend. Along the way we managed to make stops at two Fleet Farms -- one of our favorite stores. We finally made it home in early evening on Wed. 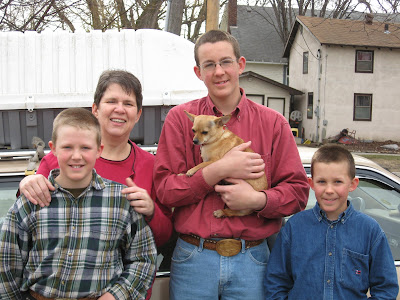 We are into goat kidding, and so far one goat delivered twins two days ago. Thankfully everything went well, and Jonathan discovered them when he went out to collect eggs. Last night Jim, Peter and Jonathan drove to town to meet for a class with another friend; I sent Andrew down to the shed to check the goats before it was too dark, and he came running back to say our youngest goat had just kidded and she wasn't taking care of it. All 3 of us got busy. The poor mama is so young herself that she was scared and stayed away from the kid, so we brought the kid up to the house, cleaned it off and kept it warm. Andrew brought in the bottom of one of our dog houses and placed her in there, and I called a friend in town to see if she would drive over to the church where the guys were meeting to get help. We tried to milk the doe with the 2 little ones, but thought it was because her teats were so small that we couldn't produce any milk. Thankfully, Jim and the older boys returned and they were able to milk out the colostrum from the mama and Peter fed it to the kid with a pop bottle and nipple. Peter told us later the reason we couldn't get any milk from the other goat was because her twins had taken it all! 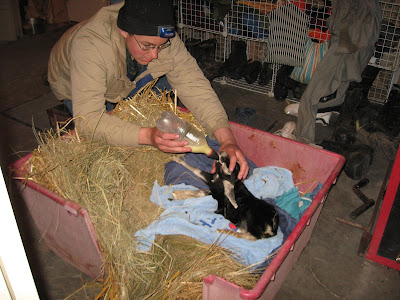 Here is the new little one, all cleaned up and ready to go! 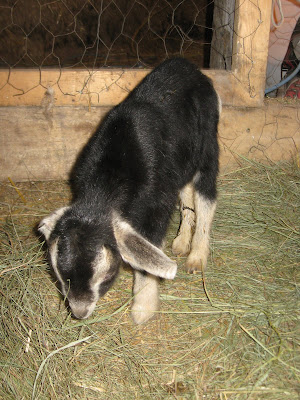 The new mama's name is Agnes, and even today she would not allow her kid to nurse. So, every two hours or so the boys go down to hold her so her kid can nurse. I guess it will be another short night. We still have four goats to kid, and that could happen any time. 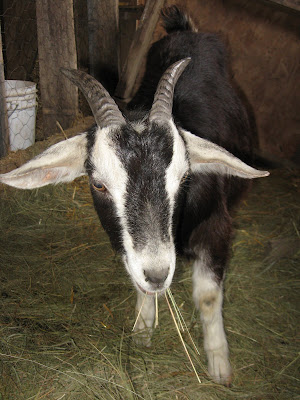 Below is a photo of You Two (there's a story behind her name) and her two kids: 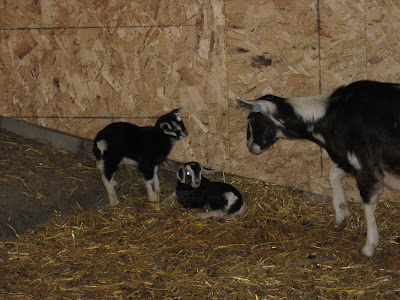 Funny Face, our usually indoors cat, is getting bigger than a house and should deliver any day now. We are interested in checking out what the kittens look like, since our two male cats died over the winter. Funny Face disappeared while we were at the homeschool convention and finally returned three days after we got back. Lots of babies on the farm to anticipate.

Life has been a blur ever since we returned. In the spirit of Dr. Ron Paul, Jim was nominated to run by the local Republicans for State Senate in our district, and that has kept everyone busy. It will be very interesting to see what develops in that area. Jim's website isn't fully developed yet, but you can check it out here.

Today is the birthday of a very special lady in our lives. Eiline Nelson was our neighbor when we lived in Fargo, and had become a very close friend. Jim lived in their apartment building (and they lived in the building as well) when he first moved to Fargo, and after we were married we rented an upstairs apartment in the same building. Mr. and Mrs. Nelson were references for us when we ended up purchasing the house across the street. Mrs. Nelson has always been such a spry, mentally sharp and interesting person, with a wonderful sense of humor and outlook on life. When we moved up here she even had her own email address and sent us a couple of notes! I wish everyone could have such a neat lady in their lives. Mrs. Nelson turned 101 today, yet she has a better memory than I do. Peter, Andrew, David and I were able to visit with her for a couple of hours before leaving Fargo on our way back to Bottineau, and it was such a treat for us. HAPPY BIRTHDAY, MRS. NELSON, WE LOVE AND MISS YOU! 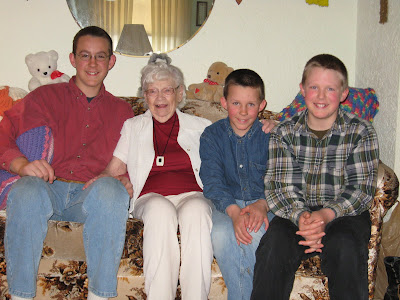 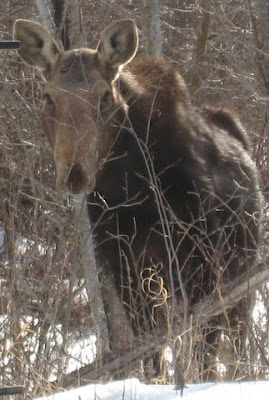 Today we drove over to our friend Paulette's, so we could transplant some seedlings that were getting too big for the cell packs they were in. I happened to take our digital camera because I wanted to take some shots of how big the plants are now. My son Jonathan was driving, and on our road we happened to see a moose! The calf (probably a year old) ran to the right side of the road, and its mom to the left. Jonathan stopped the car, and the boys were able to take a few photos of the cow. I was a bit nervous, since I knew our car was in between the cow and her calf, but she didn't move a bit. She just watched us as we watched her! It's amazing how big they are. We have state forest across the road from us, and she was just behind the gate. We were the ones that drove off, leaving her behind. I suppose as soon as we were out of sight she checked on her calf. Someone told us later that she was probably trying to get rid of the calf, since it won't be long before she delivers another one.

Just before we turned on to Paulette's road we also encountered three wild turkeys running across the road. That is good news, as a friend has a turkey license, and the season opens very soon. No one in our family has a license this year to hunt them, so they are safe with us! 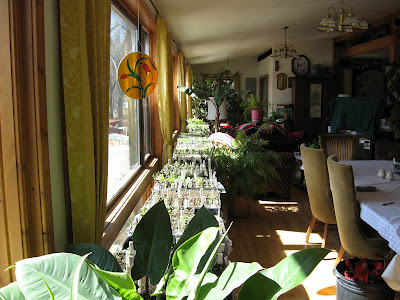 Here is a photo of the plants we are watching grow. Paulette has a wonderful solar cement wall, and it's perfect for letting the seedlings grow. The plants receive sunlight all day long. Hopefully once we get our upstairs finished we will figure out how to get them to grow at our place, so we don't have to make a mess at Paulette's. 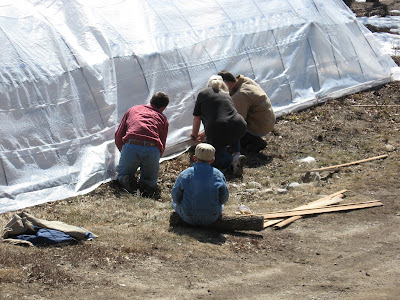 We had beautiful weather today, warm enough for Paulette to work in short sleeves! However, the city we lived in just 4 hours away received about 12 inches of snow today! We sure could have used the precipitation, as our area is very dry. It won't be long before all the snow has melted. I guess until this last snowstorm the Turtle Mountains had the only snow in the state.
Posted by Lynn Bartlett at 6:49 PM 3 comments:

It's still a bit chilly out, but time for us to get our hoop house ready for planting. This winter the guys used a heavier tarp to cover half of the hoop house, and it was used to house half of our chickens since the shed couldn't hold any more. Yesterday the boys dug one of our portable chicken pens out of the snow and hauled to it to a part of the field where the snow has already melted, and loaded it with the chickens from the hoop house. I should have been out there taking photos, as it sounded like an interesting time when trying to catch them. The boys then hauled out the hay. 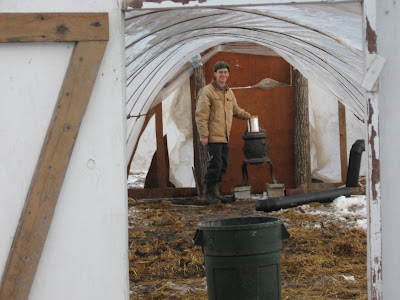 Jonathan and Peter built a permanent back wall, and will soon set up the small wood stove that someone gave us, to use it to heat the hoop house on our still chilly nights. 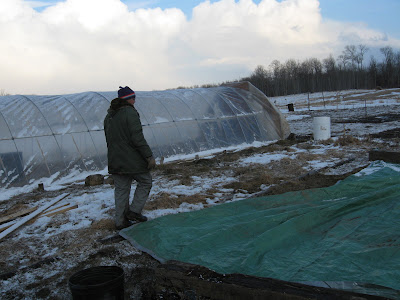 Here is a photo of the spring plastic we use on the hoop house, and the green tarp was the one we had over the portion that held the chickens for the winter. Now to find a place to store it until we need it again. 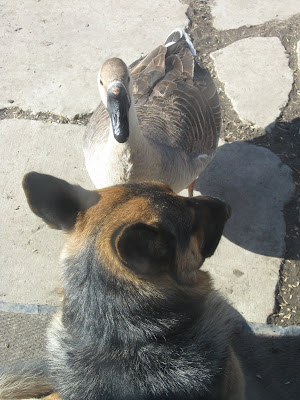 An interesting relationship is developing between our lone goose and our German Shepherd named Samson. A year ago, friends that sold us some goats also gave us their ducks and two geese, saying they would probably enjoy our lake over their pond that dries up over the summer. As time went on, the duck population diminished, and by spring we lost all the ducks and one of the geese.

Well, this goose has taken a great liking to Samson. She will preen him, and snuggle next to him. He is a great sport, and allows her to stay close. We have caught her taking baths in Samson's water dish, and she seems to have acquired a taste for dog food. One problem is that Samson likes to lay on the rug in front of the the door to the basement, so the goose spends her time on the patio in front of the house as well. That adds another dimension to the already muddy front. Geese can make a real mess. 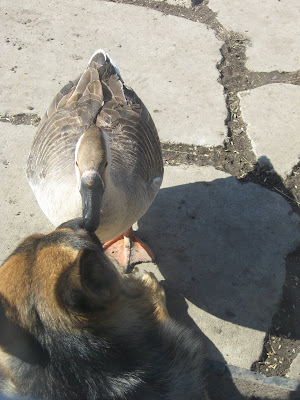 Yesterday we discovered a goose egg next to Samson's softball that he likes us to throw for him, so I guess the goose is a female! All this time we thought she was a male. David had it for breakfast this morning, and he only needed one to feel very full. 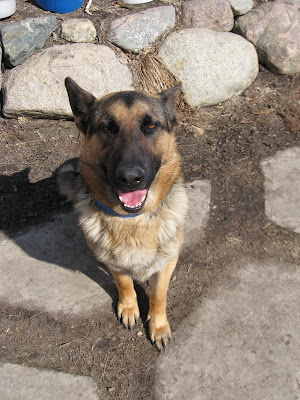 Samson is quite a dog!
Posted by Lynn Bartlett at 7:40 PM 2 comments: