I walked over to the clotheslines this morning, and discovered another goose egg. For the past few days we've found our goose's eggs in various areas around the house. This goose lost her mate over the winter, and then attached herself to our dog, Samson. 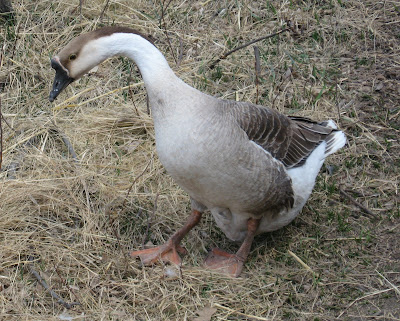 A couple of weeks ago she managed to break one of her wings, and then disappeared. We thought she was dead for sure, until our youngest decided to check out why Samson was looking at something in the brush by the clotheslines. There was the goose! We've left her alone, but apparently during the night she comes out of hiding and deposits eggs for us. We now have five in the refrigerator, and it's time for some scrambled eggs. I'm thinking I better crack them outside, in case she pushed the ones she was sitting on out of the nest and by the clotheslines.

Our house has become a nursery for other things as well. Jonathan loaded up the incubator, and so far it's hatched approximately thirty chicks. During the night last week we had fifteen hatch, and was it ever smelly in here! 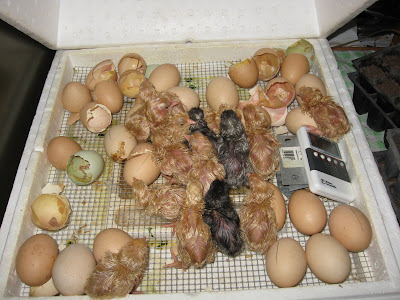 About 4:00 p.m. Jonathan decided that since it was a warm day he would take the chicks to the barn and place them under the heater so we could air out the house. We then left to do our neighbor's chores, and when we returned two hours later, we discovered fourteen of the chicks in the barn had died, leaving only one. The lesson we learned: Pay attention to what the directions state regarding farming matters, even if they don't list the reason why you should do something. Now we know why they need to be in the incubator for at least an entire day. We won't do that again! Since then another batch of ten has hatched, and we were much more careful with them. They were added to the bunch in the barn that we ordered -- all 120 of them. So far so good.

Two days ago we knew our favorite cat, Funny Face, was in labor and about to deliver. We had thought she would deliver at least two weeks ago, since she was so big. We decided to let her labor in peace, and left her to her own devices.

Well, she didn't deliver in her usual box, but decided to have them on top of Jim's garment bag that he uses when on trips! She was busy cleaning up four tiny black and white kittens. Later, when she was resting, we deposited them into her box that is located in the bathroom area. 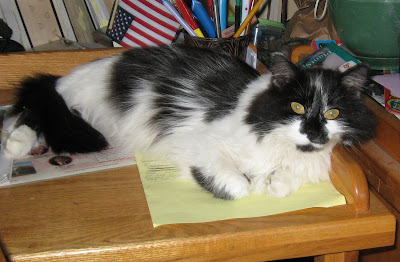 A little while later, Andrew came out of the bathroom to announce Funny Face had just had three more kittens! No wonder she was so big. That made a total of seven babies. The most she has ever had was five, so she topped her previous record. We'll take some photos when they start looking like kittens.
Posted by Lynn Bartlett at 7:06 AM 4 comments:

What We've Been Up To

There are lots of things going on over here as usual, and maybe I can give you an update of what's been happening.

I had the opportunity to make a very quick trip back to Minnesota to visit my family. This time it was only me traveling with a friend, and it seemed so strange not to have at least the boys along. We headed out on Saturday, and returned on Tuesday. Quick trip, but a very enjoyable one. I miss my family.

Our goats started kidding about two weeks ago, and the last one had twins on Saturday. There were ten kids born to six goats, but we lost one of them. The poor thing was weak from birth, but we thought she was going to be okay until one morning Jonathan found her laying outside in a very weakened condition. The boys brought her in the house and worked hard to keep her alive, but she ended up dying. The boys are more matter of fact about death than I am, as it still bothers me when an animal doesn't make it.

Even though the weather has not been the best, it must be okay for wood ticks. We have been inundated with the creepy little things, and it's irritating to have to deal with them. I don't even go into the woods, but still find them on me. The older I get, the more their bite causes swelling and itching, so I try to check often to make sure none of them has found a home. If I leave an empty laundry basket outside for the clothes that dry on the line I have to bang it on the ground before filling it, to get rid of any would be hitchhikers. Poor Samson has had more than his share of them, and I usually grab one of the boys to pick off the ones that are full of blood.

We have terrible drought conditions this spring. Yesterday there was an article in the Fargo newspaper that interviewed a farmer from Willow City, which isn't too far from us. He said he had planted his fields a month ago, and nothing has yet come up. We have our plants sitting in cell packs in the hoop house, but our nights are still in the lower 30's and the heat from a barrel stove is necessary to keep them going. Last week the boys planted onions, peas, potatoes and carrots, but are waiting to water them in the hopes that it will soon rain.

On Saturday we picked up 175 evergreen tree seedlings from the conservation office, and they are now in the ground. Thankfully we have a water tank that is able to be filled from the lake and hauled around on our trailer to keep the trees watered. Jim purchased some cedar trees and planted them on Saturday; then on Sunday our friend Steve Schadler (aka Mountain Fire Keeper; it sure is great to have him back up here again) came by and told us we should probably take them out, since cedar can transmit a disease to our fruit trees, called cedar apple rust. Nothing like learning the hard way. Apparently this disease can be transmitted to fruit trees from even as far away as two miles.

Grandpa Bartlett met a man down in Florida this winter while they were wintering there who is retired from a blueberry business in Michigan. GpB (as Grandpa is affectionately known) told him of our efforts in raising raspberries and strawberries, and he offered to send us some blueberry plants to try out in our area. I guess they may arrive later this week. Jim has been studying what is necessary for the soil, etc. for blueberries, and it will be interesting to see how they fare in our area. There is also the possibility of trying some kiwi up here from the same man as well.

This week I am spending three days helping a local ministry to open up their summer camp. We started in the kitchen, taking everything out of cupboards and sending them through the dishwasher. Makes me very thankful that I have never found a trace of mice in our house. The camp has just installed one of those high ropes courses, and when we were done for the day went down to see how the training was going. I don't mind climbing, but wouldn't be too excited to have to stand on a platform that is on top of a telephone pole with nothing to hang on to! And then, to jump off!
Posted by Lynn Bartlett at 8:07 PM 4 comments: 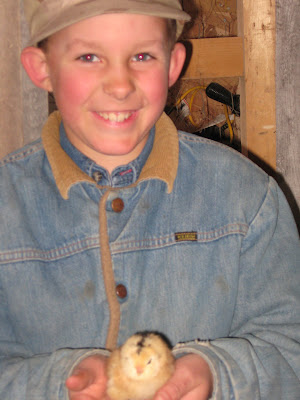 David and his new friend. 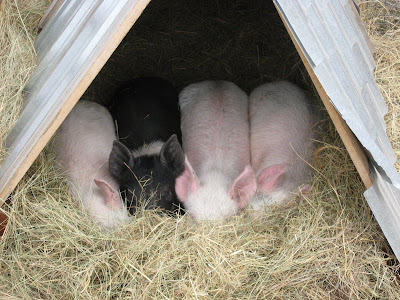 Our new piglets. No names yet! 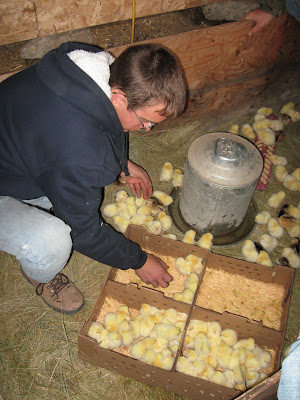 Our delivery of chicks. 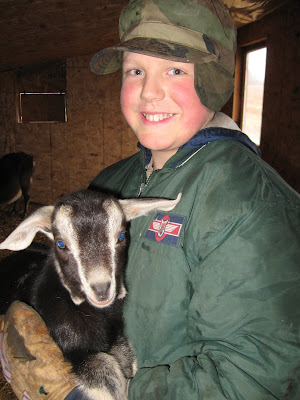 Andrew and one of the new kids.
Posted by Lynn Bartlett at 6:16 PM No comments: