This winter we've seen a lot more coyote activity than in previous years.  It seems they are becoming a lot more bold.

Late last week, Jonathan spotted a lone coyote halfway up the hill to what we call our big field.  He grabbed his gun, positioned himself and waited until he could get off a good shot.  I was curious myself, so I stood almost next to him and watched the drama unfold.  That was a dumb thing to do, as the shot was hard on the ears.

I thought Jonathan had hit the coyote, as it jumped just about straight up, jerked around and ran into the woods.  David ran up to where it had stood to check for blood -- and sure enough, there was something there.

Now this morning we spotted another coyote.  The interesting thing to me is that sunrise is coming sooner each day, and these coyotes are out near the farm in the daylight.  Today Andrew spotted the coyote because he was jumping up and down as they do when trying to catch mice.  We also have some very good sentries down in the barnyard.  David's Morgan horse, Darla, stands very erect, with her head pointing in the direction of the intruder.  The cows had also stopped eating and were looking intently in the same direction, so we couldn't miss the telltake signs of something amiss. 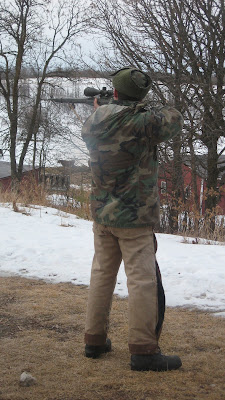 Jonathan, hoping for a clear view of the varmint
. 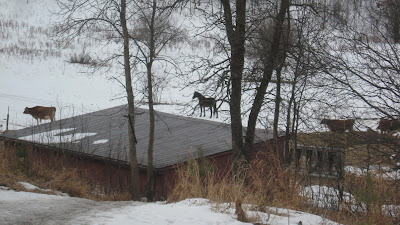 Here are our sentries:  Sandy the cow, and  Darla the horse 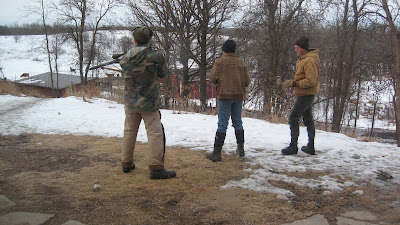 Jonathan, David and Andrew just outside the basement door.  The photos were taken through the window, since Jim was on the phone and I now know better than to stand close to where a gun is about to be fired!.

There are other things happening in the area, too.

Below is an excerpt from a news story found in last week's Courant, which is Bottineau's weekly newspaper.  The account is believeable, as we know the couple involved.

WOLF SIGHTED UP IN THE TURTLE MOUNTAINS, by Scott Wagar, Bottineau Courant

When Reno and Marilynn Strand awoke on Sunday morning, January 22 and looked out their front windows they probably thought they were looking at the PBS show "Nature" up close and personal, because what they saw out their window left them in amazement and with great concern
"At 7:15 that morning, Reno got up and let the dogs out," Marilynn said.  "I came into the kitchen about 7:30 and began making coffee when I noticed our Border Collie standing in his pointing position.  I thought that was odd that our dog was in that position.  So, I looked out the window to see what he was pointing at and there was a big animal 30 feet from our house going back and forth and back and forth.  As the animal was pacing I realized it was a wolf.  So, I called out for Reno and told him what I was looking at and he came running wtih his field glasses and confirmed it was a wolf.  From there, I ran to the door and opened it, and our dogs were very happy to come inside."

Once the Strands' dogs were in the house, Reno and Marilynn kept a close eye on the wolf, which eventually left their property and went toward their neighbor's house.  "We called over to our neighbor, Wayne Olson, who also has a dog and warned him about what we saw," Marilynn said.
With the wolf gone, the Strands went back to their Sunday morning routine, but seeing such an animal, with such a vicious reputation, they continued to look out into their yard.

"We watched imtermittently for some time and about a half an hour later a deer ran into our yard and stopped about 20 feet from our house.  What we saw was terrible because the deer's neck had been slashed open and the whole back end had been eaten off," Marilynn said.  "Then, out of nowhere, we saw a coyote come into the yard from the north, then another coyote came in from the south and one more from another direction."

With the phone call complete, Reno brought out his rifle and made an attempt to shoot the deer.  However, the animal was positioned in such a way that Reno couldn't fire off a shot because he would be shooting toward his neighbor's home.

As Reno stood there considering what he could do next, a police vehicle drove into the yard, chasing the deer and coyotes off the Strands' property.

"After that we never did see the animals again, but we did hear them for a couple nights after that, but we haven't heard them since," Marilynn said.

The Strands feel the wolf was in their yard because it was attempting to get their dogs.  Since that time, they have been careful when letting their two dogs and cat out of the house, because they fear losing them..

"I now go out with our animals and keep a close eye on them," Marilynn said.
Posted by Lynn Bartlett at 8:44 AM

We, too, have had more coyote activity here. One morning the cat was sitting by our patio door. He didn't come in when I opened the door and was looking out to the yard. When I looked I saw a coyote really close to the house. I grabbed the cat inside and started yelling at the coyote which just stood there looking at me. He even came closer. I woke Tim so he could shoot it. But it was still dark, he had just woke up, and missed. I don't like having coyotes but would like it less to have wolves. I think it sad that some people are trying to bring them back after nearly getting them exterminated. Signs of the times, I guess.

Wow, I hope the wolf steers clear of y'all!!!

Wow, a little close for comfort.