It's been hard to accept the fact that it's already July.  We've had some very busy days, as well as having not so nice weather.
Our muddy areas are drying out, and there have been fewer rainy days.  We've also had some temperatures in the 80's -- a first for this season.
I am still concerned and continue to pray for the families in Minot, ND, who have lost their homes due to flooding.  Minot is our closest larger city, which is 100 miles away from us.  The river crested but there's a lot of clean up to do after it completely goes back within its banks.
I have lots to catch up when it comes to this blog, but for now will tell you a bit about recent happenings.
Rick is one of our weed eaters ... No need for a gas powered one when you have goats around!  Rick is our Boer goat, and so far has fathered 2 kids that are half dairy/half Boer.  He has a very even temperament, but tends to be more than a bit whiny when he isn't happy with his surroundings.
The guys have been staking him in areas that needs the brush taken out.  I walked down to the barn this afternoon and was amazed at how completely he cleans out everything!  Not a leaf was left in where he resided yesterday.
Yesterday was also this season's maiden voyage of Andrew's raft.  Earlier in the week Jonathan and David walked over to our neighbor's house to retrieve the raft; last fall the tether had broken and it floated out into the lake.  Since we don't have a canoe or boat we had to let it float around until it touched shore.  The raft spent the winter stuck in the ice, but after it melted the raft ended up close to our neighbor's shore.  They poled it back to our bay and did a better job of tying it up.
David talked Andrew and Jim into taking the raft out for a swim.  Due to the immense amount of rainfall this spring the shoreline is closer to the barn and more stumps, etc. are submerged, so navigation is quite difficult.  The guys worked and worked, but never did get the raft out of the area where it was docked.
This afternoon David managed to talk all the guys into trying once again -- and they successfully got the raft poled out into the bay.  A good time was had by all.
While waiting for the raft to take off  I noticed a little procession out in the field.  We've kept the 2 Jersey calves in the same area as the goats, and where one goes -- so goes the rest.  I guess the calves think the are goats!  This time it looks like Milcah was leading the pack.
If you look up the hill you will see a white tent looking thing.  Peter decided to invest in a portable car port to use for milking the cows in the field.  He hasn't figured out all the details yet, but it should work quite well.  This will save a lot of time, and can be moved closer to the cows as they are moved in paddocks in the big field.

Darla and Calliope are enjoying being out in the field as well.  Darla isn't all that keen on cows, and they are kept separate from them.  Every evening when I'm upstairs washing and sterilizing milk bottles I look out the window and see Darla trotting up and around the side of the hill.  She gets her exercise, and I'm sure it helps to keep the flies and mosquitoes at bay.  Calliope is almost 30 years old, and is content to stand under a tree and relax.

We actually have a herd of cows!  To the right are Della and Sandy, Peter's Jerseys, and to the left are our beef cows.  I had never seen Red Angus before we acquired these 2 yearling steers.  We've had Cal for a year now, and he's enjoying his new friends.

Jonathan also has his chickens up in the big field.  The broilers are in the chicken tractors, and Jonathan's laying hens and future layers (hatched last March) have shelters inside of electrified poultry netting.  Moving pens keeps Jonathan very busy.  The tractors are moved twice daily and the hens moved every other day.

The broilers will be ready for butchering in a couple of weeks.

This is a photo of Jonathan's laying hens.  Last fall he purchased some layers from a lady that didn't want to winter them (those are the white ones), but most of his layers are Rhode Island Reds.

Jonathan has been smiling a lot lately -- he had his braces removed last week!

Last week our second sow delivered 13 piglets.  They are all doing fine!  It was so much easier to have this bunch than the ones born the end of March (for us, but maybe the sow would say differently).  Pigs have a gestation of 3 months, 3 weeks, 3 days, and she was right on target.
The first bunch of piglets currently numbers 11, since we ended up losing 2.  They are 3-1/2 months old and growing larger every day. 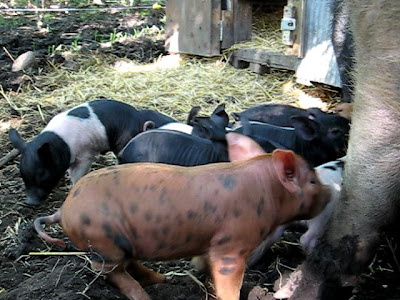 Maybe you remember Wilbur, the piglet we had in the house for a couple of weeks.  Well, he didn't make it.  We got him to the point where he could rejoin his siblings in the barn, but he never really fit back in with them because he had a leg that didn't work quite like it should and was easily jostled around.  He took to feed like a pro, but ended up having a prolapse and the guys worked unsuccessfully to keep his intestines in.  He was the little pig that wasn't afraid but always greeted us when we went into the barn.
﻿
Posted by Lynn Bartlett at 4:56 PM

Y'all are quite the farmers!!! With your sows... how much do they eat a day (like over winter) and did you use a boar or AI?

Marci,
David is our sow feeder, so I asked him about their feed. I guess each sow receives 4 pounds of feed per day. If they have any more they become too big to be useful for producing more piglets.

Last year was the first time we wintered pigs, and kept the 2 sows. In October we purchased our boar named Zorro from friends. He also is given 4 pounds of feed per day. It didn't seem to be a problem to winter the pigs, they had shelters and lots of straw to burrow into.

I don't have a photo, but one evening I heard someone tipping over grain buckets outside -- it was Zorro, and he ended up eating our dog's food in the dish just outside the door. I knew he was big, but our German Shepherd looked like a toy poodle compared to him! At least he's friendly and more afraid of us than we are of him.

Hey, Thanks for the update! Wonderful pictures, you all seem to have it together so much better than us. I just can't seem to get excited and keep up with all the work.*sigh* Everythig looks good and the animals are beautiful!

We're loosing land left and right due to the high river, lost 8 ft and took out a whole section of our fencing, Mike had to come home from work yesterday and do a repair so we could let the cows out. I'm sick of it all and it's not even begun yet! Sorry for being a downer, just tired I guess.

Glad to see you are finally getting some nice weather too.
Blessings,
Kelle