I'm taking a break while waiting for more chicken to be brought in.

David and I are quality control, which involves doing the final cleaning and inspection, bagging, weighing and getting into the freezer.

Jim, Jonathan, Peter and Andrew are outside in a small alcove in the woods, doing the actual butchering.

Jonathan tried some new things this year, and our days seem to be going much smoother than other years.

New this year is a modified Whizbang chicken scalder, which is made out of an old water heater the guys picked up at the landfill.  Andrew also made a holder for chickens, so after they are cleaned up the chickens sit on PVC pipe pegs and allowed to drip dry.  Makes my work so much easier.

Photos will follow after  we are finished.  Yesterday we managed to butcher close to 80 chickens, and today so far we've done 50.  I think the guys said we have 40 to go before we call it a day.  That means we'll be butchering again on Monday. 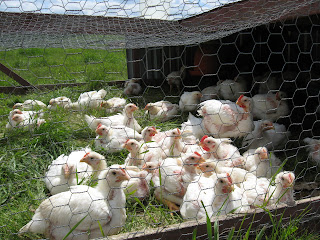 Posted by Lynn Bartlett at 3:37 PM

Looking forward to the pictures. The PVC thing you sit them on... is it before inspection or after?

How many more chickens are you guys going to be butchering this year? I assume Jonathan has been staggering his groups, so just simple curiosity at how many you will be doing. :)
Ben and I did 49 last year ourselves (took us 4 hours too) and that wrecked my elbow for 3 months, so I am going to be more careful this year or maybe try to get some help. I don't like feeling weak, but I sure don't want the pain in my arm again for that long!
TTYL
Heather

Hi Marci,
David would rinse off the bird, then "hang them up to dry" on the rack. Then I would take one off, check inside and out, make sure they were dry enough and then bag them, weigh, etc. I don't know if it was that the chickens were averaging 5-6 lbs. instead of the monster 7-9 pounders we did in years past, or if it was the new scalder system, or the new feed figured out by Jonathan or what, but I didn't have to deal with leftover pinfeathers or a layer of yellow fat on them, so my work was much easier.

Heather,
First of all, congratulations on your new daughter! I thought I left a comment on Facebook but it didn't show up.

I'm not sure how many Jonathan will end up doing this year. By the time he finishes up tomorrow we probably would have done 250. He's waiting for confirmation on another large order of chickens and turkeys, and has 50 currently in the brooder. I think he wanted to do 3 batches this summer but the bad weather in the spring kept the first batch from thriving so it took much longer.

I know how doing all this work (don't know how you and Ben could do that many alone!) can cause some physical problems. I've been operating with plantar fascitis in both feet, and makes for VERY long days.