A Taste of Summer

Our weather is just starting to resemble summer. The boys were complaining how hot it was today, when the temperature was only about 80 degrees. Jim allowed three of them to take a canoe ride and cool off, and from my vantage point weeding in the gardens, it sounded like they had a great time. We are thankful that our friend Steve has loaned us his canoe.

Our raspberries and strawberries so far are doing well. There are a lot of runners in between the rows of raspberry bushes, and I mentioned to a friend that we planned to till them in. She suggested we place an ad in the local paper and see if anyone would want them. We were pleasantly surprised when yesterday we had three callers inquire and purchase some of them. Great! The boys are thrilled to make a little bit of money. Jim and the younger boys spent time today transplanting some of the strawberry runners into a recently tilled garden area, which will greatly increase our future strawberry crop.

One thing we were concerned about is the lack of bees in the area. How are things going to be pollinated? Jim lost out on getting more bees this year, and it seemed there were no wild pollinators in the area. I was glad to have a bumblebee check out my weeding this afternoon, so maybe they are beginning to come around. Last year a man summered his bees on our land, and we were hoping he would get them in place this year before we were in desperate straits. They haven't shown up yet, and I wonder when that will take place. It's interesting how we forget from year to year when events happen -- unless we keep a farming journal. Jonathan has been keeping better track this year, so next year we'll know exactly when we did what. 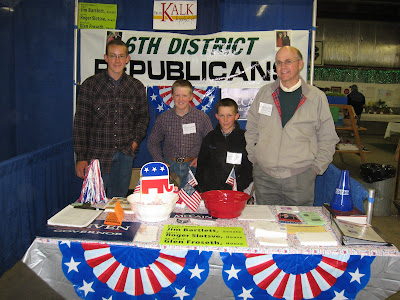 The Bottineau County Fair was held last Thursday through Sunday. I still can't figure out why they hold the fair in June, as that means 4-H'rs and the rest can't show their garden produce. Even the state fair is early -- in July. The weather was cold and rainy, but people still came out to see the exhibits. This was the first year they didn't offer carnival rides (fine with us). It was also the first year we attended the event, as we aren't much for that type of entertainment. I helped out in the kitchen once again on Saturday and Sunday at Metigoshe Ministries, so I didn't make it to the actual fair. Jim had to help man the Republican booth, so each day he took along one or more of the boys to help out. This was the first county fair they have ever attended. 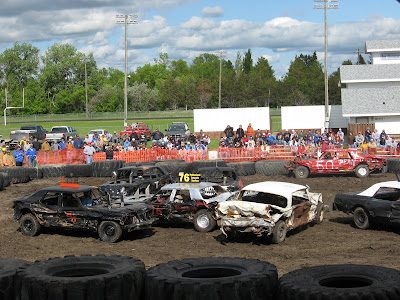 It was also their first time viewing a demolition derby, and I guess they had a great time there.
Posted by Lynn Bartlett at 3:52 PM 4 comments:

Last March we received an email from a lady named Colleen, who said their family found ours through our son's Peter's blog. Apparently they had Googled a particular song, and one of the sites listed was Peter's, where he was playing that song. They were missionaries living off the coast of Quebec, and could they possibly stop by for a brief visit on their way to California? We said yes, please come for a visit. I am always surprised when someone wants to stop by, as we are definitely off the beaten path.

Well, we didn't hear from their family again until last week, when Colleen wrote that they were going to be in North Dakota this week. Some phone conversations followed, and we had them as our visitors yesterday morning. 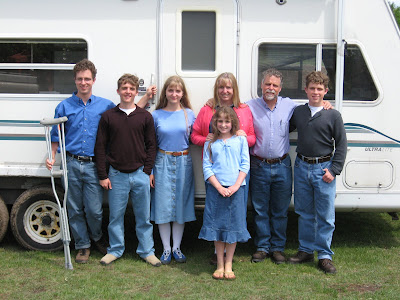 It's always such a blessing to meet like-minded people, with many of the same interests. Our boys played music with their boys, and an enjoyable time was hopefully had by all. We certainly hope they will be able to stop by again some day.
Posted by Lynn Bartlett at 5:41 PM 4 comments:

Below are a few of the activities the Bartletts participated in over May and the early part of June. I thought when we moved to the country we would have a bit slower lifestyle, but it's been anything but that. 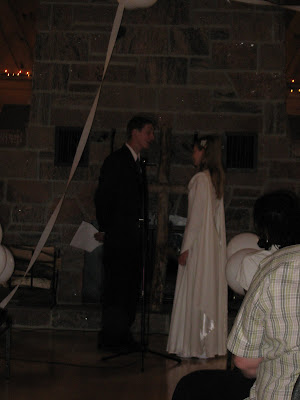 In mid May we traveled about three hours to attend the wedding of friends of ours. We are good friends with both families, and it was such a blessing to see their children marry. Both of them were homeschooled from the very beginning. When Jim and I were married, we moved into married student housing at NDSU, and many times I saw Louisa's mom walking her round and round the tar walkway that separated the different areas of the complex. We even attended her dedication service! We lost touch with the family after her dad graduated from NDSU, and then about ten years later we met Timothy's older brother when he was attending NDSU. We were very surprised to discover that Louisa's family fellowshipped with Timothy's family, and then we became reacquainted with them. The wedding was such a blessing. Yesterday I helped with a wedding reception at the local retreat center, and marveled at the difference between a Christ filled wedding, and what I witnessed yesterday. That wedding lasted all of 25 minutes, and then it was on to the reception activities and later a wedding dance. I was very thankful that the retreat center has a policy of no alcohol on the premises. Can't imagine what went on at the wedding dance. 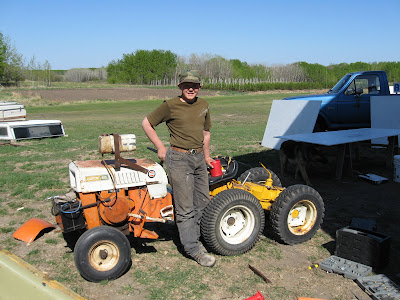 Andrew has been busy with working on his garden tractor that he received from friends. We had another older one that he took apart and added to the first one. Since this photo, he has added a dump box and painted the whole thing camouflage green. He told me tonight that someone may be giving him some hydraulics to make the box part dump. He is thrilled. 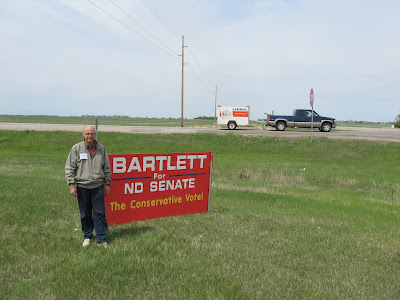 This is a photo of my favorite candidate for State Senate. Our family has been working on the creation of these signs, and whenever Jim travels, he takes one along to set up in whatever town he is visiting. You can visit his website to see what he is up to. Andrew has been very diligent to help Jim with his campaign, and David loves to travel with Jim everywhere he goes. Our sign shop is located in what will some day be the main floor of our house. 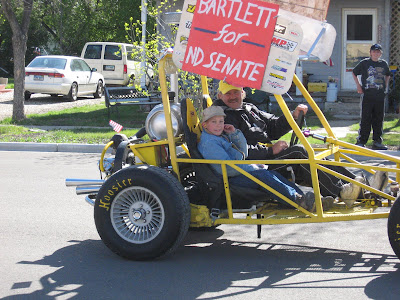 Bottineau had their annual Memorial Day parade. A friend our ours volunteered to add a sign to his dune buggy, and asked David to ride along with him. David had to wear earplugs, though! 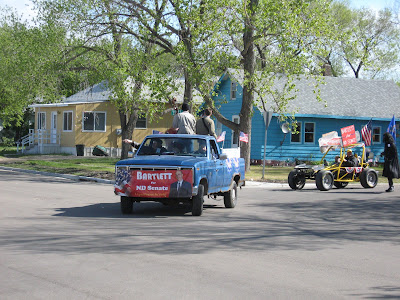 What a cold day ... I wore a sweater and as well as a warm jacket to keep me from freezing while distributing brochures to people in the crowd. 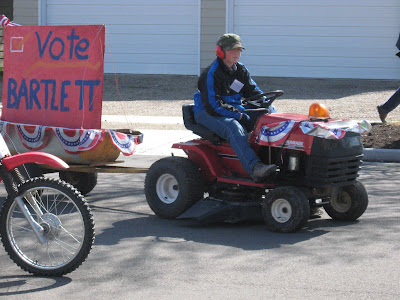 Andrew had planned to drive his own garden tractor in the parade, but at the last minute had trouble getting it to start. He opted instead to use one that belongs to our friend Steve. Andrew made his own sign, and installed in in a little trailer that looks kind of like a bathtub! 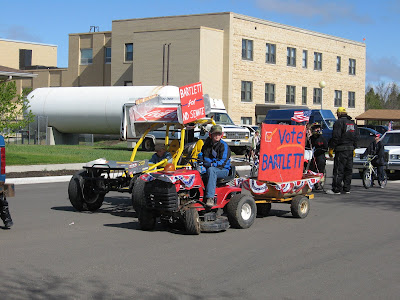 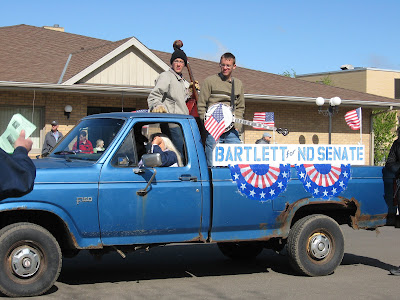 Jonathan and Peter rode in the back of our pickup truck to play some music. As you can see, it was a bit chilly back there. Our friend Paulette drove the truck (I was afraid I would pop the clutch if I did it), and friends rode along with her to throw candy to the children along the route. 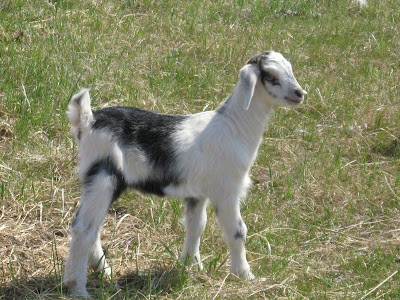 This is one of our goat kids, a product of the boys' favorite goat. When the boys did the evening chores on Memorial Day they discovered that one of the goat kids was missing. We had no idea what happened to her. The goats are in movable pens made with cattle panels, and the kids are able to squeeze in between the wires and move around. A couple of days later, Samson found a lower leg of the kid. We concluded that a coyote must have gotten her. Hopefully that will never happen again. Peter and Jonathan constructed these movable pens for the goats, and Peter then created a milking stand that folds up when not in use. I guess it works much better than having to take each goat to the barn for milking.

Last week I managed to squeeze in two days of working in the garden areas. David and Andrew helped me plant quite a few flowers in my rock garden and along our rock wall, and then we moved to an area by the hoop house that is reserved for whatever I want to plant. It will be interesting to see what that area looks like later in the season, when the flowers start blooming! All of our flowers, herbs and vegetables were started from open pollinated seeds, and we are working towards saving as many varieties of seeds as we can.

I also planted my herbs into my herb garden. This year my catnip, spearmint, and lavender did not come up. My echinacea didn't winter well, either, so next year I'll have to grow more of them. I tried a few new herbs this summer, so we'll see how the garden develops.

Samson was my constant companion the days I spent in the garden. For some reason, he loves it whenever someone throws rocks for him. He doesn't want to catch them in his mouth, but loves to pounce on them as they are bouncing and rolling -- kind of like a cat. When I would go back to my planting, he would set a rock as close to me as he could so I would hopefully throw another one for him. 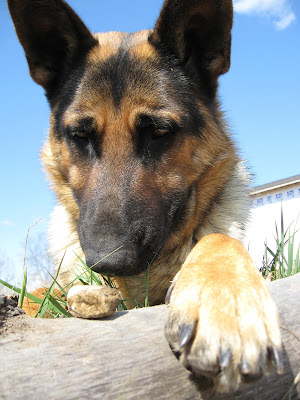 We are terribly dry up here. Last Thursday we did have rain, but need a whole lot more. I have already seen grasshoppers and crickets, and they usually do not show up until later in August. Thankfully, Jim has been working on a pump system to bring water up from the lake, and so far it has been working well to water the garden areas. The next step is to set up a sprinkler system, but that may not happen until next year. 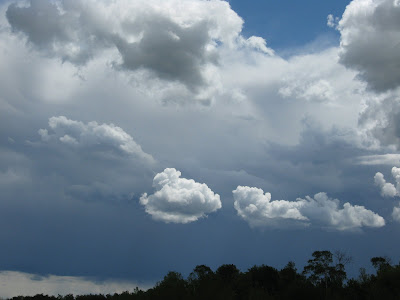 Today we had very dark clouds rolling past, but no rain. Everything went to the northeast of us. There's a chance of rain every day this week, and we'll see how things go.
Posted by Lynn Bartlett at 6:42 PM 4 comments:

This spring has been a very busy time for us; not only with activities related to the farm, but with Jim's campaign for the state senate position. I have also been helping out at the local retreat center, and will be working again today to help another lady with a wedding reception for 300 people. I keep hoping things will settle down soon, but our list of activities seems to be accelerating. I guess we are all being stretched.

I woke up yesterday morning with water dripping on me -- it was raining! We were so thankful to have a day of nice, steady rain. This is really the first rains we've had since the snow melted, and local farmers are wondering if it came too late for the growth of hay. At least there will be one cutting this summer, instead of the usual two harvests. I didn't mind donning my rubber boots to head out to the car, or trying to guide the car as it slid down the greasy driveway.

Hopefully after the weekend is over I will have time to post some photos of our recent activities.
Posted by Lynn Bartlett at 5:17 AM 2 comments: