An Update on Blizzard Conditions

Here is an update on what happened yesterday near Fargo, ND, courtesy of the Fargo InForum online newspaper, found at:  http://www.inforum.com/event/article/id/303453/

FARGO – After a night of dramatic rescues in a blinding blizzard, authorities in Cass and Clay counties took to the highways this morning to continue to check stranded cars for motorists. Visibility had improved, but temperatures dropped below zero as round two of the storm approached.
By: Mike Nowatzki, INFORUM

FARGO – After a night of dramatic rescues in a blinding blizzard, authorities in Cass and Clay counties took to the highways this morning to continue to check stranded cars for motorists. Visibility had improved, but temperatures dropped below zero as round two of the storm approached.
Interstate 94 remained closed this morning from Fargo to Jamestown, N.D., and from Moorhead to Alexandria, Minn. Interstate 29 was still closed from Grand Forks, N.D., to the South Dakota border.
Highway 10 between Moorhead and Detroit Lakes, Minn., also is closed until further notice.
Cass County Chief Deputy Jim Thoreson said three motorists were rescued overnight from County     Road 10 west of West Fargo, which became the alternate route after I-94 closed following a pileup Thursday involving at least 25 vehicles.
The last person to be rescued from County Road 10 was a semi driver who told authorities at midnight he wanted to stay with his truck but then called about 4 a.m. for authorities to come get him, Thoreson said.
Deputies and state troopers following snowplows in four-wheel-drive vehicles were out this morning looking for stranded motorists.
They rescued four people from two vehicles on I-29 near Argusville shortly after 5 a.m., Thoreson said.
A family of four and a person in a separate vehicle were picked up on I-29 south of Fargo near the Kindred exit, he said, noting it took rescuers three hours to make the roughly 30-mile round trip.
As of 7:30 a.m., the tactical operations center set up in Fargo for the storm wasn’t aware of any motorists still stranded, Thoreson said.
“That’s our biggest worry is we haven’t heard from somebody who’s stranded,” he said.
Thoreson said “dozens and dozens” of vehicles that have crashed or gotten stuck are being left on or along the roadways.
“I don’t know that any of the major roadways will open today,” he said. “And once they do decide, it’s going to take a long time to clean these cars out before they can open up these roads again.”
Since the blizzard hit, authorities in Cass County – with help Thursday night from the Clay County Sheriff’s Office on snowmobiles – have escorted about 30 people back to safety, Thoreson said.
Clay County Sheriff Bill Bergquist also dispatched his deputies early today to start checking for stranded motorists as visibility improved and plows started to open up roads.
Deputies weren’t called to rescue any stranded motorists overnight, but emergency personnel needed a snowplow to clear a path to a medical assist in Sabin, he said.
Bergquist asked people to stay home until crews can clear the roads.
With a second blizzard expected to start moving into the Fargo-Moorhead area mid-afternoon, Bergquist said he’s “a little nervous with it being New Year’s Eve.” Authorities are asking revelers to use common sense and forgo partying if it means having to travel, he said.
“They’ll just have to celebrate another night,” he said.
A blizzard warning is in effect from 6 p.m. today to noon Saturday. The National Weather Service says new snow accumulations of 6 to 9 inches can be expected, with the heaviest snowfall likely near a line from Fargo to Bemidji, Minn.
So far, no life-threatening injuries or deaths related to the blizzard have been reported in Cass or Clay counties, officials said.
Posted by Lynn Bartlett at 8:30 AM 3 comments:

We are having some serious weather in the state.  Thankfully we didn't receive the 9 inches of snow that was predicted, but did end up with about three inches and lots of wind and blowing snow.   I walked down to the mailbox later in the afternoon and just about froze.

Here is a story from the Fargo, ND online newspaper called the InForum, and can be found at
http://www.inforum.com/event/article/id/303410/

FARGO -- An emergency operation was under way Thursday night to rescue motorists stranded by a 100-vehicle chain-reaction accident on Interstate 94.
By: Wendy Reuer, INFORUM

FARGO -- An emergency operation was under way Thursday night to rescue motorists stranded by a 100-vehicle chain-reaction accident on Interstate 94.
The accident, caused by high winds and snow resulting in zero-visibility conditions, was reported about noon Thursday 10 miles west of Fargo between Mapleton and Raymond.
The rescue operation involved Cass County, the state Highway Patrol and the state Department of Transportation.
Capt. Eldon Meher, with the North Dakota Highway Patrol, said the accident was a domino effect, with at least 25 vehicles crashing into each other. Dozens of other vehicles were left stranded for hours between wrecks blocking the highway.
It reportedly began when a pickup ran into a jack-knifed semi and became stuck. A second semi then jack-knifed when it tried to avoid the first accident.
Meher said motorists could not see in front of them and continued to drive into other vehicles or into the ditch.
The accident scene was about a quarter-mile long, said state Highway Patrol Sgt. Dave Wolf.
Angie Kamin was on her way back home to Kindred, N.D., from Fargo when she heard news of the accident on the radio.
Although she and her husband weren’t driving more than 10 mph, she said they could barely see past the hood of their Jeep.
They slowed down, knowing they would come upon the scene. When they did, Kamin said she was horrified by the number of vehicles involved.
“It was horrible. I’m a North Dakota, Minnesota resident all my life – I’ve driven in everything – and I’ve never seen anything like that before,” she said.
Near dark, officials still did not know how many motorists remained trapped in their vehicles.
A tactical operations center was set up at 2:30 p.m. Thursday at the Cass County Jail. A staging for snowmobile rescue operations was set up at the Cass County Highway Department building in West Fargo.
By 7 p.m., Cass County Sheriff Paul Laney’s office and the Highway Patrol were in full rescue mode.
“We’re just doing full blown rescue out of the vehicles,” Laney said. “Right now we’re just trying to get people out.”
Two teams made of snowmobile patrols and snow plows were heading to the scene for rescue operations as of 8 p.m. Laney said he had no idea how many vehicles still had occupants left in them at the time, but the rescue would continue as needed.
“The rescue operations will keep going all night until we feel comfortable everyone is out,” Laney said.
Essentia Hospital representatives in Fargo said two people were brought in by ambulance from the accident and one walk-in injury was reported. One person was treated from injuries at Sanford Hospital also.
Check back to inforum.com for updates to this story.
Posted by Lynn Bartlett at 8:36 PM No comments:

For Your Listening Pleasure ...

While Jim, Jonathan and I were in Bismarck, the other boys decided to do a music video.  Andrew usually plays mandolin, but took up the upright bass and Peter is on guitar.  David was the camera man.  The title of the tune is "Angelina Baker."
Posted by Lynn Bartlett at 7:13 AM 3 comments:

In Jonathan's Own Words ... 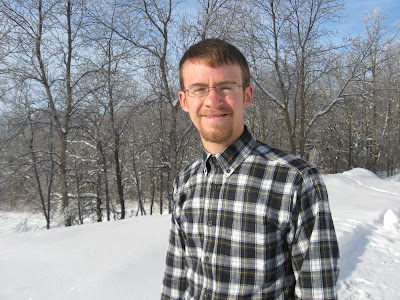 I want to update you on what will be happening this week in the Bartlett family.  Jonathan has shared some very personal things, and I would now like to share them with you.  Please check it out here.

We certainly would covet your prayers.
Posted by Lynn Bartlett at 6:33 AM 7 comments:

How to Remove a Sparkplug the Hard Way

I could never explain the saga of removing rusted sparkplugs as well as our son Andrew.  You can read all about it on his blog .  Farm life just seems to have a lot of these types of situations. 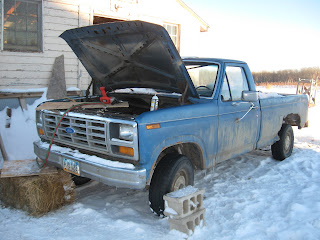 A friend who grew up on a farm told us one time that typically it takes at least half  your time looking for what you need, the other half actually getting the work done.   Around here it takes more than half your time just figuring out how to get the job done!
Posted by Lynn Bartlett at 12:14 PM 1 comment:

About 4:00 this morning our dog Samson placed his front paws on our bed and wanted attention.  I scratched his ears and told him to get down.  He then proceeded to make some soft barking noises deep in his throat.  I was glad when he quit, because then I didn't have to get up to let him out.  It's been very cold at night and I've spoiled him by letting him stay inside on those types of nights.  Besides, the cats have taken over his dog house.  I wouldn't want to stick my head into a dog house filled with cats ready to scratch and bite, either.

All of a sudden I heard the yipping of coyotes -- just on the other side of the wall!  I woke up Jim, who hadn't heard anything, and jumped out of bed.   At the same time, Jonathan came running out of the bedroom area with a gun in his hands.  By this time, everyone but Andrew was up.  I guess he too was awake, but his bed felt too cozy to climb out.

Jonathan quickly threw on his boots and placed a head lamp on his head, and went outdoors to see what he could see.

The next thing we heard was a shot.

By then we were all anxiously waiting at the door to hear about what he saw.

Jonathan came back in and explained that apparently Samson had dragged a deer hide by the side of the house and that was what the coyotes were feasting on.  As he walked out of the house the coyotes ran to a trail leading into the woods.  He managed to get off one shot but missed them as they took off.  Jonathan said he could see the glow from their eyes as they would turn to look back at him as they ran away.

We all went back to bed, but I never did go back to sleep.  Peter was up at his usual 5:15 to get ready to milk, and we all got up to do our usual chores.

At daylight the guys checked the area and found coyote tracks all over the place in the snow -- near the pigs, by the barn, and even right in front of the door to the basement.  The cats must have been terrified, since the coyotes were also right by the dog house as well.  I suppose if I would have had Samson outside he could have deterred them from coming this close to the house, but I sure would have hated to have had him tangle with those mangy creatures.

I sure hope we don't have another visit tonight.
Posted by Lynn Bartlett at 6:35 PM 3 comments:

Maybe someone should really start an agrarian social networking system like this!