The older boys did very well this year, and we have four deer to process. Yesterday we finished one deer before heading to a friend's birthday party, and today finished another one. I am very thankful to have an electric meat grinder, or the process would take a lot longer. We aren't very fussy about our cuts of meat, and use more ground venison than roasts, steaks or stew meat. 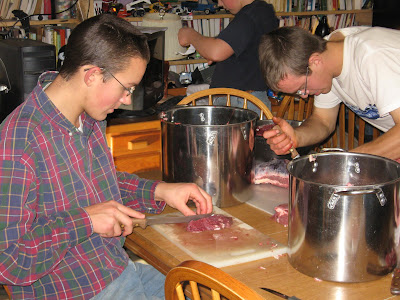 Peter and Jonathan did more of the cutting off the bones, 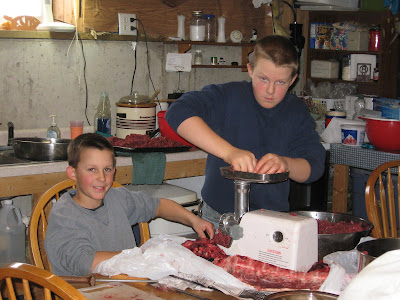 and David and Andrew ground the meat. I took the job of packaging the venison for storing in the freezer. We are very thankful to have purchased a large chest freezer with profits from our summer raspberry business. 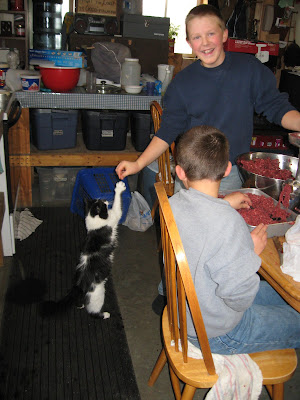 Occasionally we sneak our oldest cat into the house, but today she quickly became a pest, due to begging for scraps. 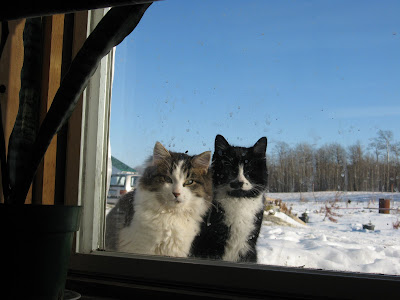 We also had a couple more visitors, watching us from the window over the kitchen sink.

Once again, I'm behind. I am getting ready for a craft/bake sale in town tomorrow (selling, raspberry jam, bread and buns), so I will send you to Jonathan's blog to read the latest.
Posted by Lynn Bartlett at 8:25 PM No comments:

Yesterday was the 2nd day of the regular deer hunting season in North Dakota. Jonathan and Peter are both hunting this time, and they took different positions from each other last night before sunset. Later, both arrived home at the same time, and when David asked Jonathan if he got anything, the reply was no. No one asked Peter, so he piped up, "Don't you want to help me get my buck home?" He shot a large four by four buck, even bigger than the one Jonathan shot last year! We are thrilled! It is currently gutted and hanging up in the woods near the house. Coyotes must have found the entrails out in the woods, as our dog was barking furiously all night.

This poses a good problem. We are expecting company from Fargo for a few days this week, and between finishing up tomatoes, squash, pumpkin and onions, we have to figure out when to process this buck, as well as the deer Peter shot in Sept. and still remains in the freezer.

Now for Jonathan to shoot his deer!

Photos hopefully soon to follow.
Posted by Lynn Bartlett at 8:35 AM No comments:

Off the Campaign Trail

It's been a busy week. Come to think of it, it's been a very busy year. I'm thankful that the season of Jim's campaigning is over.

Jim, Peter and Jonathan spent the day Monday traveling all over District 6, picking up campaign signs. We were thankful the ground wasn't frozen, so the stakes weren't embedded in the ground. There also was a banquet to attend toward the western part of the District in the evening, and after that was over they still had more signs to take down. North Dakota has a law that states all campaign signs must be removed before midnight the day before election day. Peter told me they had to fill the truck's gas tank three times before they arrived home at 1 a.m.; that gives you an idea of how large of an area our District covers.

Meanwhile, back at the farm we were still processing carrots for canning. Peter called and left a message on our voice mail about 7:30 to ask us to milk the goats since they would not be home on time. I should have thought about that earlier, since they are usually milked about 5:30 every evening. Needless to say, we milked by flashlight. I had only attempted to milk twice before this, and was a bit apprehensive. Andrew had not done much milking in the past, and it was only David that had watched Peter as he did his chores. The boys recently built a new barn for the goats, horse and cow and had yet to install doors, so we milked also by starlight. The Big Dipper sure was bright, as it was a fairly crisp night.

I was amazed at what I witnessed. When we walked down to the barn in the valley, the goats were lined up at the fence, complaining that we were late. Andrew opened a gate, and out ran Leah, who promptly jumped up on the milking stand and waited for her grain to eat while milking. I tried my hand at milking her, and was very surprised and pleased that I finally had gotten the knack of milking. She is our best goat, and very friendly and patient. I've struggled with carpal tunnel syndrome off and on for the past 20 years and canning didn't help matters. Just milking one goat was all it took for my right hand to cramp, so I had to quit after doing Leah. I am hoping some day to be a two handed milker, but at this point I was thrilled that I did what I did.

When Leah was done, we sent her back into the fence -- and then Ebony ran out as Leah was going in. It's amazing to me that goats are such creatures of habit that once a routine is established they don't want to change. Ebony is harder to milk as her teats are very small. She also has bad front knees, so we had to help her up onto the milking stand. One of us would hold the flashlight, and another milked. Ebony wasn't as patient as Leah, and as soon as she ran out of grain she stepped into the milking dish and the milk was all over the stand. Oh well, our dog Samson was right there to lick it up! We finished with Ebony, and as she was going back into the fence another goat came running out and jumped onto the stand. I guess we didn't have to know Peter's routine for milking -- the goats all knew what to do and when to do it. We milked six goats, and three of them knocked over the milking dish. I had already decided all this milk was going to Samson and the cats, so it was okay.

Tuesday was election day. We went to town in the afternoon to do our voting, and then came home and made homemade pizza and breadsticks for supper, with ice cream for dessert. That meal is our celebration menu for just about any occasion. We were all thankful we made it through all the challenges of campaigning. Jim was not elected to the state Senate, but he gave it his all and we knew we had done what the Lord had called our family to do.
Posted by Lynn Bartlett at 7:24 PM 2 comments: