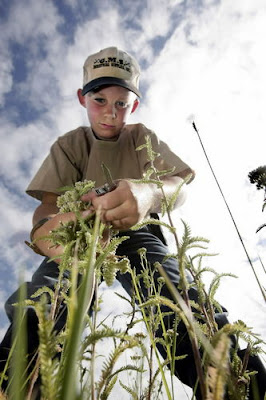 [David Samson / The Forum David Bartlett cuts a yarrow plant while gathering them for use as a medicinal remedy at the family’s property near Bottineau.]

The Bartletts started out with 150 weed-covered acres, a pop-up camper and a thatched-roof outhouse where, to the sound of coyote howls her first night, Lynn Bartlett wept with fear and qualms about abandoning city life.

Lynn, her husband, Jim, and their four home-schooled sons moved from Fargo to a remote homestead in the Turtle Mountains four years ago. They didn’t make the transition easy on themselves: They plucked weeds by hand. They squished pesky potato bugs with their fingers. They let some chickens roam free. 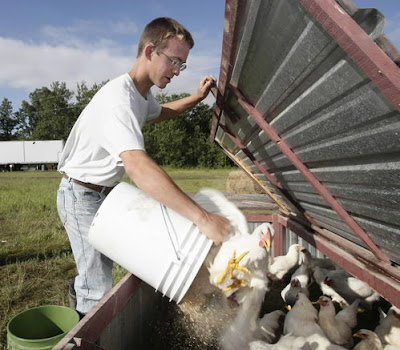 [Jonathan Bartlett feeds chickens as part of his morning chores on the family homestead near Bottineau. David Samson / The Forum]

Jim Bartlett, who heads the North Dakota Home School Association, half-jokingly calls his breed of Christian home-schooler “the new hippies” – a growing group of converts to organic farming and the simple life that defies political labels. 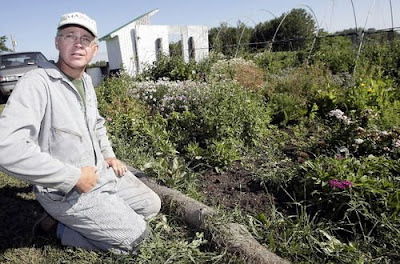 [Jim Bartlett works in one of the gardens on his property near Bottineau. David Samson / The Forum]

They put up solar panels, choose home births and concoct herbal remedies. But rubbing shoulders with new agers at farmers markets doesn’t diminish their conservative credentials. They embrace environmentally friendly farming in a bid to become better stewards of God’s creation, to keep their families together and to follow a quintessentially right-wing ideal of self-reliance.

The Barletts moved west with two Fargo chickens named Lewis and Cluck. Expanding their operation was a humbling experience.

“We knew exactly why we were doing this; as far as knowing how to butcher a chicken or a pig, that’s a different story,” says Jim Bartlett, a former North Dakota State University engineering professor, adding, “I took engineering so I wouldn’t have to deal with blood.” 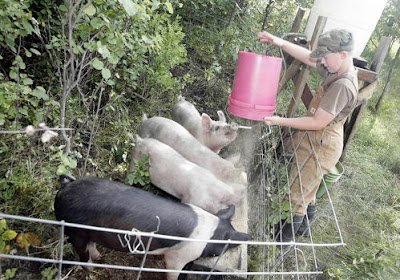 They use sheep manure and crop rotation instead of chemical fertilizer. They avoid pesticides, spraying their potatoes with rhubarb juice instead. They keep their goats and chickens in movable pens so they can nibble on fresh grass every day. They add goat’s milk to the chickens’ water instead of pumping them with hormones. 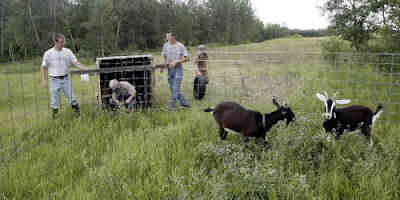 [Peter, Jonathan, David and Andrew Bartlett move a goat pen to a new location with fresh grass on their family farmstead. The pens are moved daily to provide the animals with clean living spaces. David Samson / The Forum]

[Jonathan, David, Peter and Andrew Bartlett close a goat pen after moving it to a location with fresh grass for the animals. The pens are moved daily to give the animals clean living spaces. David Samson / The Forum]

Two years ago, John Mesko moved to his family farm near Princeton, Minn., where he raises grass-fed beef and lamb and pastured pigs. A one-time field agronomist for Dow Chemical, the pesticide-making giant, Mesko came to believe companies such as his employer contribute to Americans’ declining health.

Also, Mesko says, his family is farming “the God-honoring way.”

“God didn’t create pesticides,” he says. “He created all plants – including weeds – for a purpose.”

The God-honoring way, of course, is more work, and temptation can set in.

In the winter of 2005, Sid and Twilla Hughes moved to the 52-acre Valley Vegetables farm outside Minot with their 10 home-schooled children. When the snow melted, they found waist-high weeds and a scrap-metal dumping ground. The family tackled the weeds with bare hands. 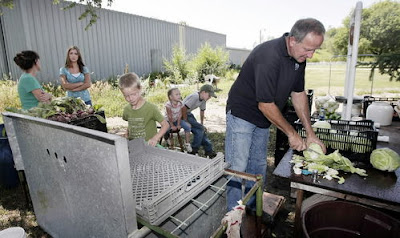 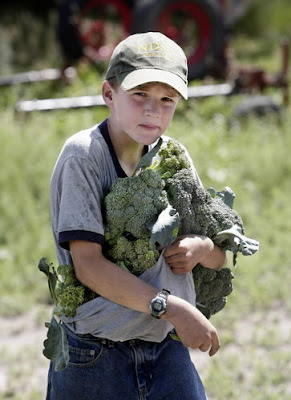 [Joshua Hughes carries an armful of fresh picked broccoli on the family farmstead near Minot, N.D. David Samson / The Forum]

Last year, cockleburs exploded in their pumpkin patch. Carson, the Hughes’ 17-old-son, reasoned with his dad to resort to chemicals this one time. Sid bought some, but then he thought about his kids running barefoot in the field and munching on freshly picked carrots. He couldn’t bring himself to spray.

Lure of the land

Home-schoolers say it’s no coincidence they’re fueling what some call a Christian agrarian movement – a hands-on, back-to-the-land extension of the wider push for environmental stewardship within evangelicalism.

“The public school system is so omnipresent in our society that once as a home-schooling family you decide you don’t want to go down this road, all of a sudden you see all these other roads you don’t have to follow,” Mesko says. “If I can teach your own kids, maybe I can grow my own food.”

Farming allows dads such as Bartlett, who once plodded through traffic for two hours to his General Motors office in Detroit, to be more involved in raising their kids. It allows children to stay close rather than scattering off to college and corporate jobs.

The Bartletts appear to be in growing company. They’ve met about 30 North Dakota Christian agrarian families since moving west. Mesko, whose Lighthouse Farm offers workshops on anything from how to butcher a hog to how to make hay, says he fields inquiries each month from several religious families contemplating farm life.

Christian agrarians were the subject of a recent story in Christianity Today, the evangelical magazine. The trend spawned books from 2004’s “The Maker’s Diet” (on healing through organic food and prayer) to 2006’s “Crunchy Cons” (on the challenge to conventional-wisdom conservatism from “gun-loving organic gardeners” and “evangelical free-range farmers,” to quote its subtitle.)

“I know a lot of organic farmers who see that as part of their faith,” says Britt Jacobson, project coordinator at the Medina-based Foundation for Agricultural and Rural Resources Management and Sustainability. “Independent thinkers is the best way I can think to classify them.”

Two years ago, Linda and Dick Grotberg, longtime owners of a large confinement hog operation in Wimbledon, went organic. They now raise free-range antibiotic- and hormone-free cattle, and press sunflower seeds into biodiesel for their tractors.

The Grotbergs are devout Christians who once battled their school district in court over the right to home-school their now-grown children. They had an epiphany that organic farming helps them fit more seamlessly in God’s intricate design.

The changes have baffled some conservative neighbors.

“It’s amazing how many of my peers have a problem with my saying I am green,” says Linda, who sometimes jokes she’s “just barely chartreuse.” “You’re something that doesn’t fit your group at all.”

Jim Bartlett can relate. He is running for the state Senate as a Republican, a label he wears with a measure of ambivalence. He calls for a ban on abortion and blames environmental regulation for high gas prices. But he’s also uncomfortable with this administration’s sometimes cushy relationship with big business and the scale-down of civil liberties post-Sept. 11.

“The Republicans endorsed me, but I didn’t endorse them,” he says.

Flouting neat ideological boxes, agrarians share contempt for the suburban rat race and reverence for the scriptural principles of simplicity and frugality. 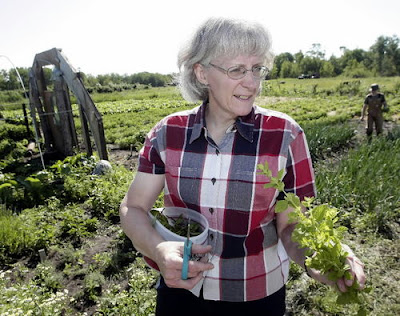 [Lynn Bartlett collects plants from one of the family gardens to use for medicinal purposes. David Samson / The Forum]

The Bartletts grow lavender for headaches and pick wild yarrow for upset stomachs, happy to boycott big drug makers. Several of the Hughes’ younger children were born at home; Sid delivered one when the midwife ran late. They exchange handmade gifts for Christmas.

Says Twilla Hughes, “We want our kids to recognize that there’s more to life than the view that whoever dies with the most toys is the winner.” 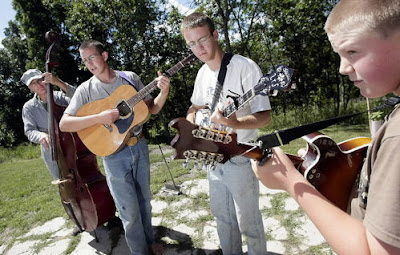 [Jim Bartlett, along with sons, Peter, Jonathan and Andrew practice bluegrass music during an afternoon break from gardening and caring for the animals on their farm near Bottineau, N.D. David Samson / The Forum]
Posted by Lynn Bartlett at 8:25 PM 11 comments: