Yesterday was another one of those wild days.
Jonathan received an early call from the post office to let him know his chicks were in. I think there were 79 Rhode Island Red chicks waiting for him. So, he drove down to town and picked them up. 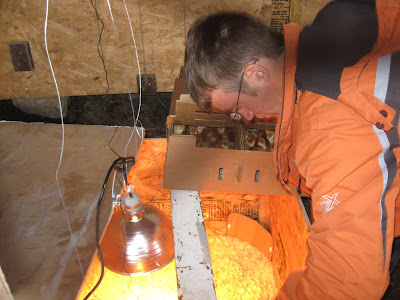 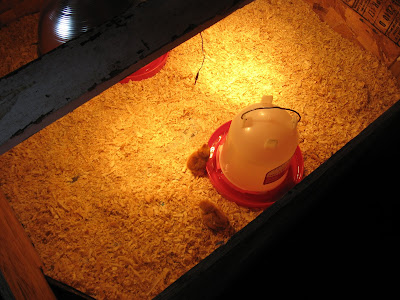 The boys were scheduled to work for someone in the area, so off they went, after Jonathan settled his chicks. Andrew stayed behind because he is still under the effects of a cold, and continues to do a lot of coughing.
The weather service forecasted heavy winds, but I wasn't quite prepared for what arrived. I now know what 50 mph winds feel like, and the damage they can do.
My first hint was watching Andrew and Jim trying to put up a ladder in front of the basement door. They were using our tallest ladder, and it reaches all the way to the peak of our roof on the lake side of the house. Ever try to hold on to a ladder that seems top heavy while winds are pushing against you? The house wrap had ripped and Jim wanted to attempt to nail more slats in the area to prevent more damage.
Jim managed to nail two more slats onto the ripping house wrap while Andrew and I were hanging onto the ladder. We then needed to move the ladder, but the winds were so strong we had all we could do to keep the thing upright. Thankfully the decision was made to wait until the winds subsided. Later on a big area of wood was exposed on the house, but that is easier to repair than having someone get hurt. 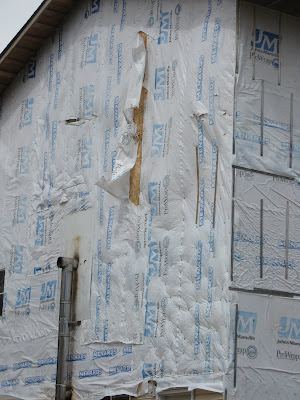 About that time the power went out. I let Jim know, and he directed Andrew to haul the generator to the chicken coop in an attempt to keep the brooding chicks warm. They got that all set up and we then made the rounds around the farm to make sure everything else was okay.
Jonathan keeps his older laying hens out in the field in chicken tractors, and one of the buckets on top of a tractor which holds water for the watering system had blown off and the cover to the tractor was sliding off the top. I ran back to the house to get more water to fill the bucket, but since the power was off I had to grab some of our stored water and drag it out to the field. Makes me more determined to have someone build me a Whizbang garden cart! The chickens were fine.
Jim made sure the hoop house plastic was holding up, Andrew checked the animals in the barnyard, and everything else was okay. 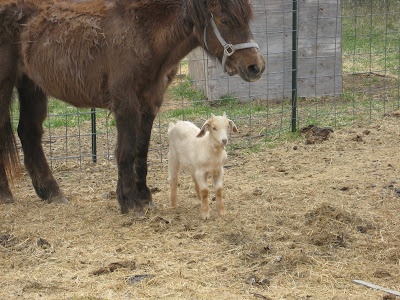 I'm very thankful we don't have winds like that every day. As I was sitting here at the computer I could hear the house creaking as we received big gusts of wind. I'm hoping some day we could construct some type of entryway at the basement door so there is protection from the winds that seem to be aimed in that direction whenever there is a storm.
Thankfully the power was only off for approximately an hour, and I didn't have to start considering what to do with my freezer items. I am also thankful Jonathan's chicks are doing fine. He will go down to town tomorrow to pick up 200 meat chickens, so we'll be swimming in chicks!
Posted by Lynn Bartlett at 6:09 AM 2 comments:

So Much to Tell, So Little Tme